Taking to his Instagram page, the designer revealed that the popular ‘Reale Design’ owned by his design company was reproduced in the film without proper authorization. 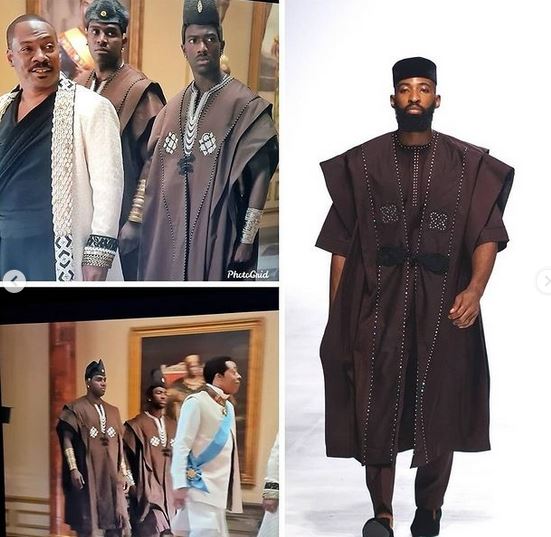 Popular Nigerian designer, Ugo Monye has threatened to file a lawsuit over the alleged use of his company’s registered design in the movie, ‘Coming 2 America’.

Coming 2 America is a 2021 American comedy film that serves as a sequel to the 1988 film Coming to America starring Eddie Murphy.

Taking to his Instagram page, the designer revealed that the popular ‘Reale Design’ owned by his design company was reproduced in the film without proper authorization.

“It has come to our attention that our Registered Reale Design was reproduced and featured in the movie, ‘Coming 2 America’ (the “Movie”) without UML’s authorisation. The producers – Paramount Pictures, New Republic Productions, Eddie Murphy Productions and Misher Film Productions- through the costume designer of the movie, Ruth E. Carter, commissioned some tailors/designers in Nigeria to design and produce some costumes for the Movie that are an infringement of UML’s design,” an excerpt of the notice reads.

The notice clarified that actions will be taken against the film’s producers if not properly addressed.

See how Nigerians reacted to the notice by Ugo Monye below;

offical_ivykakiiza: These are the things that make my blood boil…when you see great work why not reach out to the designer. C2A was supposed to push Black Excellence…however, my own personal view it failed but the platform was a huge place to showcase African fashion and I remember seeing the shot and screaming OMG that’s UGO design straight away…you go and get what’s yours

ezeani: Your claims are valid in Nigeria and MAYBE the rest of ECOWAS. Most you can get is for them to stop showing the film in the areas where the issuers of the “patent” have jurisdiction. But great job for getting the court of public opinion on your side and driving more attention to your brand.

iamelsmart: You are doing what is right, it has to stop.
When I saw those designs, I thought you are in the know and part of it

kinglexy007: They are mad.. What does it take them to give you guys the job to do! I’m a sure a Nigerian among thre team advice them against that.