However, students, who felt that the road was only closed for vehicles, were wrong when stern-looking soldiers prevented them from entering their school premises. 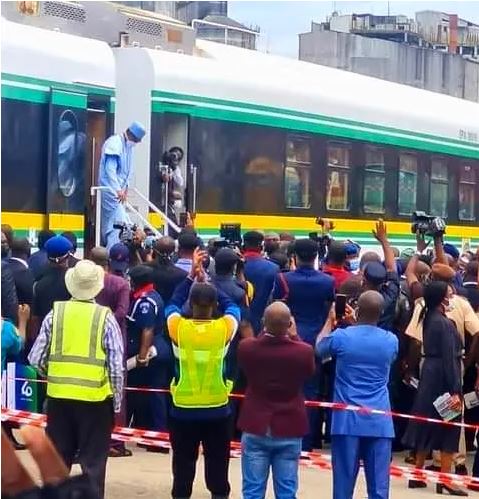 President Muhammadu Buhari at the inauguration of the Lagos-Ibadan Rail Line, in Lagos.

According to a report by Vanguard, some secondary school students in Lagos State felt humiliated when security personnel not only prevented them from accessing their schools, but also “stopped us from seeing our Daddy, the President”.

Security men had closed the Muritala Mohammed Way where the Nigeria Railway office is located as early as 7.30a.m., ahead of the inauguration of the Lagos-Ibadan Rail, and diverted traffic to Herbert Macaulay way.

However, students, who felt that the road was only closed for vehicles, were wrong when stern-looking soldiers prevented them from entering their school premises.

The students, who felt disappointed, told Vanguard that they felt humiliated by the security men for not allowing them access to their school and an opportunity to see their President.

Some of them were students of Wesley Secondary School, located along the same street as the Nigeria Railways headquarters.

“We felt very bad that they could treat children like us this way. We wanted to see our Daddy, the President and they denied us,” said the students who refused to give their names and classes.

But the students paid a touching tribute to the country when they suddenly started singing the national anthem to the admiration of everyone around.

Meanwhile, many people trekked many kilometers to their places of work and businesses as a result of closure, which led to heavy traffic on other roads within Yaba.