In a recent documentary titled, 'Children for ransom', the BBC News X-rays the trauma of abductions of schoolchildren on the victims and their parents. 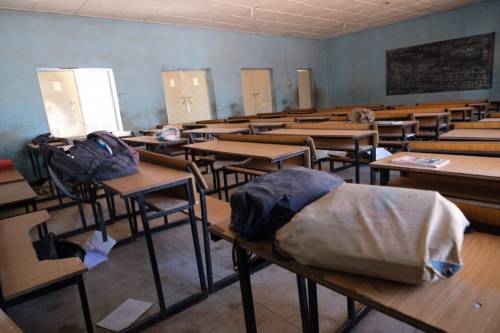 A report by BBC News has shown that since December 2020, over 1,000 students in schools in Northern Nigeria have been kidnapped by gunmen from their school domitories

In a recent documentary titled, 'Children for ransom', the BBC News X-rays the trauma of abductions of schoolchildren on the victims and their parents.

The wave of abductions has devastating consequences for the country, which already has the highest number of children out of education anywhere in the world, it said.

Bandits had in March invaded the Federal College of Forestry Mechanisation, Afaka in the Igabi Local Government Area of Kaduna state and abducted 39 students comprising 23 females and 16 males.

The abductors stormed the college on the said date, shooting indiscriminately before taking students.

A video of the hostages was shared on social media. This spurred parents to organise a protest, urging the state and federal governments to secure the release of their wards in spite of government's stance that no ransom would be paid.

The parents were seen on a video screaming, 'Free Afaka 39' but the Kaduna state government had expressed belief that paying ransom was simply fuelling the growing business of banditry.

The Kaduna State government, however, during the period reiterated its stance on negotiations with bandits.

The state governor, Nasir El-Rufai said, “The only way to end kidnapping is for society to take a stand and that we will not pay. I know the pain of losing children but I have to subordinate that to the overall interest of the society which elected me to provide leadership. I commiserate with their parents, I sympathise with them but that will not change our stand.”

In a statement issued by the Kaduna State Commissioner for Ministry of Internal Security and Home Affairs, Samuel Aruwan, the state government promised to prosecute anyone found negotiating with bandits.

But, the father of one of the affected pupils, Friday Sani, said he would rather be arrested in his bid to secure the release of his children than allow them remain in captivity under gunmen.

He told the BBC, “My children are in the bush pointed to with AK-47 but I am here in the house. If I am under the detention of the state government, I don't think there would be any policeman or soldier that will point a gun to me. I will be safer in the hand of the government more than my children in the hand of the bandits. I feel that I should be arrested, it will make me create more history.”

On May 5, about 27 students abducted from the college in Afaka were released by their abductors, Sani's daughters, Rejoice and Victory, were among them.

Victory Sani said, “It was hell to be there, very terrible, sleeping outside, seeing dangerous insects, scorpions and snakes around.”

Rejoice Sani said, “One of the hardest things being around those people was waking up every day to see gunmen above your head."

When asked if they will want to continue with their education, Victory said, “Yes, definitely, I'll continue.”

Rejoice on the other hand said she would also love to continue her education but not at the school.