Mrs Benson was set free by a judge at the Lagos State High Court, Oluwatoyin Taiwo, following a plea bargain between the state government and the defendant. 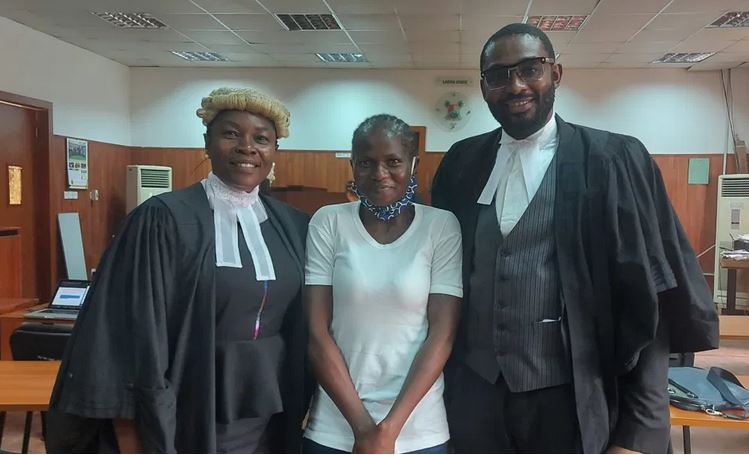 A 38-year-old woman, Titilayo Benson, who had been held at the Female correctional Facility, Kirikiri, for about 10 years without trial, regained her freedom on Thursday, PREMIUM TIMES reports.

Mrs Benson was set free by a judge at the Lagos State High Court, Oluwatoyin Taiwo, following a plea bargain between the state government and the defendant.

“She has been in custody for over 10 years without arraignment,” a representative of the Directorate of Public Prosecution told the judge.

“How did that happen? How can anybody be in custody in 10 years without being in court? It is not possible,” a visibly shocked judge asked.

Responding to the judge, O.A Bajulaiye-Bishi, a representative of the office of the Attorney-General and the Ministry of Justice, explained that there is evidence of production warrant but the defendant was not brought to court, and it is most likely the production warrant was not delivered.

Mrs Benson’s journey to jail began on February 8, 2010, when she fought with Blessing Imade, her friend and housemate, PREMIUM TIMES earlier reported.

While Ms Imade cut her with a razor blade, Mrs Benson retaliated by stabbing her with a broken bottle. Her friend died after a month, while still receiving treatment for the injury she sustained.

Mrs Benson was, thereafter, arrested and detained for months at the State Criminal Intelligence Department (SCID) Panti, before being charged to court.

She was charged before an Ebutte-Meta Magistrate Court for causing the death of another – a matter which the magistrate court has no jurisdiction over.

Olatunji Isaac, the magistrate, gave a holding order that she be remanded in Kirikiri prison, pending the DPP’s advice. The DPP advised in 2013 that she be charged with murder.

A murder charge with suit number LD/92/13 was filed against Mrs Benson before Mrs Taiwo’s court. However, she was never produced before the judge, who later struck out the case in 2017 for lack of diligent prosecution.

Mrs Benson was never arraigned, tried, or convicted by any court. Yet, she remained in prison for years.

Following PREMIUM TIMES’ report, the Commissioner for Justice and Attorney-General of Lagos swung into action to correct the convoluted legal process in the case of Mrs Benson.

In a statement released by the Ministry of Justice on February 26, the state said it would explore plea and sentence bargain.

“I am directed to inform you that the Hon. Attorney General is willing to concede to a plea and sentence bargain for the offence of manslaughter and time spent as a sentence,” the Ministry of Justice responded in a statement.

The period for the plea bargain was however prolonged due to the two months strike embarked on by the Judiciary Staff Union of Nigeria (JUSUN).

Presenting the plea bargain to the court on Thursday, Mrs Bajulaiye-Bishi said the defendant agreed to plead to the offence of manslaughter with a lesser sentence for term spent in custody.

In the copy of the plea bargain obtained by PREMIUM TIMES, Mrs Benson is to plead guilty to a lesser charge – manslaughter and sentenced to imprisonment for the period spent in custody.

“The facts of the case are that the Defendant on the 8th of March, 2010, in the course of a fight stabbed one Blessing Imade on her shoulder and the deceased died. The defendant was never produced for arraignment until the matter was struck out on 01 March 2017.

“The Defendant was initially charged before this Honourable Court with the offence of murder contrary to Section 221 of the Criminal Law of Lagos State 2011, to which she pleaded not guilty.

“The Defendant Titilayo Benson however through a Plea Bargain application dated the 22nd of January, 2021 applied and concluded to change her plea, upon which the information against her be amended to the offence of Manslaughter contrary to Section of 227 of the Criminal Law of Lagos State 2011,” the document partly reads.

With the plea bargain, the years the defendant has spent in custody will be converted as the sentence for the offence.

Giving judgment on the matter, Mrs Taiwo said the defendant, who has pleaded guilty to manslaughter-with no intention to murder- was earlier charged before her court.

“The defendant was not produced in court for arraignment, court eventually struck out the case for lack of diligent prosecution. It was later discovered that the defendant was in custody at the female Correctional Centre Kirikiri since March 2010.

“In the light of this, the DPP filed and enlisted the case and amended the charge with that of manslaughter. Defendant applied for plea bargain which was approved by the Honourable Attorney General of Lagos State,” Mrs Taiwo said.

She said she had received the plea bargain filed on June 23 and accepted the terms.

“This court accepts the plea bargain which states the defendant has served a prison term of sentence of terms spent in custody from date of remand on 10th of March 2010.

“In view of this, the defendant has served 10 years imprisonment and is therefore free to go. I hereby order her immediate release from the prison custody,” she said.

Mrs Taiwo also commented on the “failure of our criminal justice system,” saying in Mrs Benson’s case, the defendant in custody was not brought to appear before the court for trial.

“Efforts by all stakeholders must be intensified to ensure that production warrants are correctly served and prisoners produced whenever the court requires his or her appearance in court.

“I commend the efforts of prosecution and defence counsels in facilitating the plea bargain and the production of the defendant in court today,” she said.

Meanwhile, production warrant for Mrs Benson to appear in court on Thursday was not served on the correctional facility.

“We didn’t bring Titilayo, we didn’t receive any warrant,” a correctional officer earlier told the counsel to the defendant, Francis Akinlotan.

Through combined efforts, Mr Akinlotan and Rose Obakpolor, counsels to the defendant reached out to the correctional facility for her to be produced on Thursday on the order of the court.

Mrs Benson, whose case had earlier been stood down because she was not yet in court, was escorted into the court premises by prison officials around 1:30p.m.