The crowd is seen in a viral video marching, chanting, and waving Biafra flags on the road while some are on motorcycles and buses. 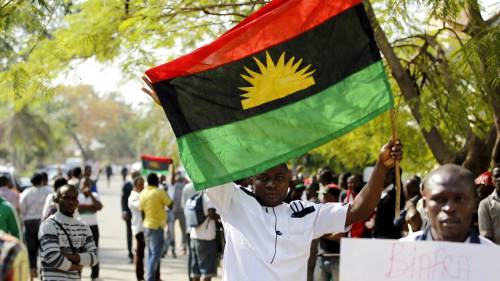 According to a report by SaharaReporters, many members and supporters of the Indigenous People of Biafra (IPOB), Wednesday, have trooped out en masse at Igweoacha, Port Harcourt, the Rivers state capital, to protest against the arrest and detention of their leader, Nnamdi Kanu.

The crowd is seen in a viral video marching, chanting, and waving Biafra flags on the road while some are on motorcycles and buses.

One of the protesters filming the incident said, “This is Igweocha in Port Harcourt. This is Biafra land. For Buhari to tamper with Nnamdi Kanu, he’s finished. We are going there.”

The irate mob who flooded one lane of the road also caused traffic congestion on the other lane.

Kanu, the IPOB leader was arrested in Kenya and extradited to Nigeria on Sunday night.

He was arraigned blindfolded, handcuffed and chained, at a Federal High Court in Abuja on Tuesday, before Justice Binta Nyako who ruled that he should be kept in the custody of the Department of State Services till the next hearing on July 26.

Kanu’s arrest has sparked many reactions from individuals and organisations, and also caught the attention of the international community.