A Nigerian Air Force pilot can be seen posing in front of the A-29 Super Tucano aircraft. 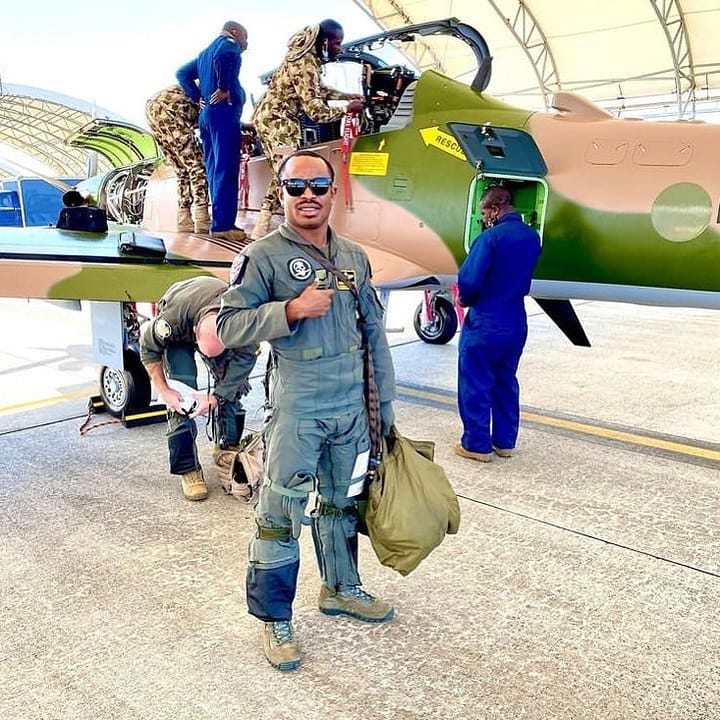 A Nigerian Air Force pilot poses in front of A-29 Super Tucano
Nigeria has received the first batch of A-29 Super Tucano attack aircraft from the United States.
There has been no official statement yet, accoriding to a report by PM News. But Defence News Nigeria which covers military activities and hardware tweeted the news.
It is believed that the American manufacturers may have fulfilled their promise to make six of the 12 aircraft ordered available this month.
In May, the Embraer Defence Security Incorporated (EDSI), manufacturers of the A-29 Super Tucano aircraft, told a committee of the National Assembly led by Senator Michael Nnachi about the progress on the planes.
While briefing the NASS team, Col. Authur Ford, of the U.S. Air Force Fighters and Advance Aircraft Directorate, stated that 10 out of the 12 aircraft were ready for delivery to NAF.
While the remaining two were undergoing modification and integration to NAF specific operational configuration.
Ford added that six of the aircraft were scheduled to arrive the country in July while the remaining six would be delivered before the end of October.
The team was assured that the aircraft, expected to play critical roles in the fight against insurgency and criminality, would be delivered as planned.
In March, the Buhari presidency also confirmed the July arrival date for six of the 12 A-29 Super Tucanos.
The presidency added that 14 pilots were on training at Moody Air Force Base in Georgia.
“Six of the twelve Super Tucanos are on track to arrive in mid-July 2021. With the remaining six shortly after that”, Garba Shehu, presidential spokesman said.
In November 2018, SNC was awarded a $329 million Foreign Military Sales contract from the US government to build 12 A-29s for the Nigerian Air Force.
The armed turboprops are intended for use against Boko Haram and ISIS militants.
Nigeria paid for the 12 Super Tucano and other weapons in April 2018, at a cost of $462million. The entire cost may rise to $593 million.
The contract to build them was announced by U.S. Defence Department on 28 November and is worth $329m for the aircraft, although the total not-to-exceed amount is approved at $344.7m.
It will include Forward Looking Infrared (FLIR) systems for six of the aircraft for six of the aircraft.
It also included Paveway II guided bombs, laser-guided rockets, 12.7 mm ammunition, unguided bombs and infrared sensors.
In addition to the 12 aircraft, the contract provides for ground training equipment, mission planning systems, mission debrief systems, spares, ground support equipment and support services.
Top Stories