The Police Public Relations Officer in Ogun state, DSP Abimbola Oyeyemi, disclosed this in a statement on Saturday. 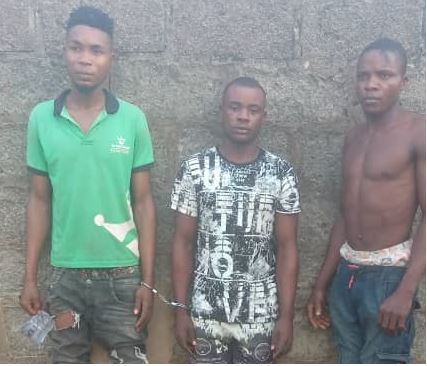 The PUNCH reports that the men of the Ogun State Police Command have arrested three suspected cultists after allegedly forcing a young man to drink blood during initiation rites.

The Police Public Relations Officer in Ogun state, DSP Abimbola Oyeyemi, disclosed this in a statement on Saturday.

Oyeyemi said a young man, Celestin Oyebuchi, complained that some people suspected to be cultists forced him to drink blood and tortured him to join their group.

Oyeyemi said Oyebuchi added that he was abducted by three cultists and taken to an uncompleted building for the initiation into their confraternity.

The PPRO said the suspects were arrested on Thursday following a report by the victim, Oyebuchi, that three members of Supreme Vikens confraternity forced him to join their cult group.

He said the complaint was lodged at Igbesa divisional headquarters by Oyebuchi that he was abducted by the trio of Williams Omoori, Edet Godswill and Emmanuel Dimgba.

“On interrogation, the three suspects confessed being members of Supreme Vikens confraternity, they confessed further that they were looking for more members to join them which led them to the abduction of the complainant who may not want to join them through persuasion,” the statement partly read.

Oyeyemi, however, said the Commissioner of Police, Edward Ajogun, has ordered the immediate transfer of the suspects to the Anti-Cultists Section of the State Criminal Investigation and Intelligence Department for discreet investigation.

He added that the Commissioner warned that war against cultism in the state is a continuous one.

According to him, the Commissioner of Police said there is an opportunity for those who want to renounce their membership to do so before the long arms of the law caught up with them.