Berry proceeded to walk around the plane for about 15 minutes and allegedly grabbed the breasts of two female flight attendants multiple times. 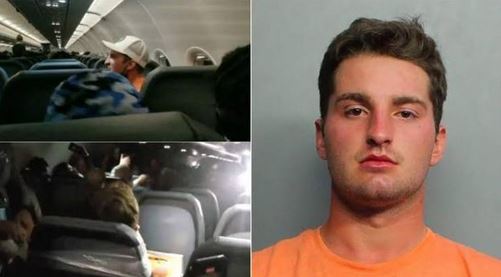 A 22-year-old male passenger on a Frontier Airlines flight was duct-taped to his seat after allegedly groping two female flight attendants’ breasts and attempted  to punch a male attendant.

Maxwell Berry created an unruly scene on the journey from Philadelphia to Miami after reportedly ordering and drinking two alcoholic beverages.

Berry asked for a third drink, and then swiped his empty cup on a flight attendant’s backside, according to a police report obtained by WPVI.

When Berry was brought his third drink, he spilled it on his shirt and went to the restroom, then returned with his shirt off, according to police. A flight attendant apparently helped Berry get another shirt out of his carry-on luggage.

Berry proceeded to walk around the plane for about 15 minutes and allegedly grabbed the breasts of two female flight attendants multiple times.

He came up from behind and put his arms around both of them and groped their breasts again,’ the police report states.

A male flight attendant was then assigned to watch Berry for the rest of the journey, but the passenger turned violent.

Berry then punched the male flight attendant, who had not provoked him.

‘He started to get aggressive and basically attack the male flight attendant,’ Alfredo Rivera, who recorded the cellphone clip, told WPLG.

Berry was duct-taped to his seat as other passengers applauded the attendants for getting him under control.

‘Finally!’ a person could be heard saying among cheers and laughter.

Berry yelled ‘help!’ and calmed down as the plane began its descent.

In a statement, Frontier Airlines said the ‘passenger made inappropriate physical contact with a flight attendant and subsequently physically assaulted another flight attendant’. That resulted in him needing to be ‘restrained until the flight landed in Miami and law enforcement arrived’.

Frontier Airlines added that the flight attendants were relieved of flying amid an investigation.

But in a later statement, the airline said that ‘the proper policies for restraining a passenger were not followed’ and ‘the flight attendants involved have been suspended pending further investigation’.