Resident doctors across the country began an indefinite strike on Monday, August 2, over grievances that include delayed payment of salaries and allowances. 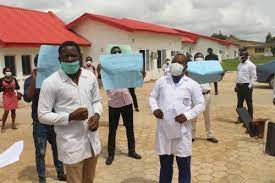 An open letter written by the organisation and signed by its Deputy Director, Kolawole Oluwadare, asked Buhari to "urgently redirect the proposed spending of N4.8 billion of public money to monitor WhatsApp messages, phone calls, and text messages of Nigerians and other people, to pay some of the salaries of striking resident doctors, improve their benefits, as well as improve public healthcare facilities for the sake of poor Nigerians who rely on those facilities, and have nowhere else to turn.”

“We also urge you to send to the National Assembly a fresh supplementary appropriation bill, which reflects the redirected budget, for its approval,” it added.

Resident doctors across the country began an indefinite strike on Monday, August 2, over grievances that include delayed payment of salaries and allowances.

Ironically, Nigeria's President, Buhari just returned last Friday from the UK where he went last month to participate in a global summit and visit his doctors for medical check-up.

He has been silent on the doctors' strike that has left many Nigerians stranded as they cannot access adequate healthcare, while he has access to the best doctors in the Western world at taxpayers' expense.

In the open letter dated August 14, 2021, the organisation said spending the N4.8bn on doctors' welfare and others would be "entirely consistent with your constitutional oath of office, and the letter and spirit of the Nigerian Constitution of 1999 [as amended], as it would promote efficient, honest, and legal spending of public money.”

SERAP said, “Redirecting the proposed spending of N4.8bn would also remove the threats to fundamental human rights of Nigerians, and ensure access to quality healthcare for the socially and economically vulnerable people who rely on public hospitals, and have no opportunity for medical treatment elsewhere.”

The letter also read: “Any appropriation law ought to comply with the Nigerian Constitution and the country’s international human rights obligations and commitments.

“The constitutional oath of office implicitly provides some safeguards on the appropriation and spending of public funds, and imposes a legally binding obligation on public officers to preserve the public money, and not to disburse it except conformably to the Constitution.

“SERAP believes that any proposed spending of public funds should stay within the limits of constitutional responsibilities, and oath of office by public officers, as well as comply with Chapter 2 of the Nigerian Constitution relating to fundamental objectives and directive principles of state policy.”

“The mere threat of mass surveillance, even when secret, coupled with the lack of remedy, can constitute an interference with human rights, including the rights to privacy, freedom of expression, peaceful assembly and association.”

“The proposed spending of N4.8bn of public funds as contained in the Supplementary Appropriation Act, which you signed last month would give rise to serious violations of the human rights of Nigerians and other people, as it would grant free rein to government agencies to conduct mass surveillance of communications of people.

“The proposed spending also fails to meet the requirements of public interests, legality, necessity, and proportionality. Additionally, the lack of any safeguards against discriminatory decision-making, and access to an effective remedy shows the grave threats it poses to constitutionally and internationally recognized human rights.

“We would be grateful if the recommended measures are taken within seven days of the receipt and/or publication of this letter. If we have not heard from you by then, SERAP shall take all appropriate legal actions to compel your government to comply with our request in the public interest.”

SERAP expressed concern that the proposed move to monitor WhatsApp messages and others is "inconsistent and incompatible with the Nigerian Constitution and the country’s international human rights obligations”.

It added, “Similarly, the UN General Assembly has condemned unlawful or arbitrary surveillance and interception of communications as ‘highly intrusive acts’ that interfere with fundamental human rights (see General Assembly resolutions 68/167 and 71/199).

“SERAP is concerned that the powers to conduct arbitrary, abusive or unlawful surveillance of communications may also be used to target political figures and activists, journalists and others in the discharge of their lawful activities, especially given the growing repression of civic space, suspension of Twitter, and attacks on freedom of expression and media freedom in the country.

“Interference with privacy through targeted surveillance is designed to repress the exercise of the right to freedom of expression.

“Surveillance of journalists, activists, opposition figures, critics and others simply exercising their right to freedom of expression – would lead to violations of other human rights such as the rights to liberty and freedom from torture and other ill-treatment.”

“SERAP is concerned about the failure by your government to resolve the strike by the National Association of Resident Doctors (NARD) over pay, insurance benefits and poor facilities, and its effects on poor Nigerians, especially as the country faces a third wave of coronavirus.”
“According to our information, in July, 2021, you reportedly signed the 2021 supplementary appropriation bill of N983 billion into law. Of the amount, N4.8bn (N4,870,350,000) was allocated to the National Intelligence Agency (NIA) to monitor WhatsApp messages, phone calls, and text messages of Nigerians and other people.”

“Of the figure, N1.93 billion was earmarked for ‘WhatsApp Intercept Solution’ and N2.93 billion for ‘Thuraya Interception Solution’ – a communications system used for monitoring voice calls or call-related information, SMS, data traffic, among others,” it added.

The letter was copied to Mr Abukabar Malami, SAN, Attorney General of the Federation and Minister of Justice; and Mrs Zainab Ahmed  Minister of Finance, Budget and National Planning.