The two governors among other discussions reportedly touched on political events in the country and the clamour for the South-West presidency in 2023. 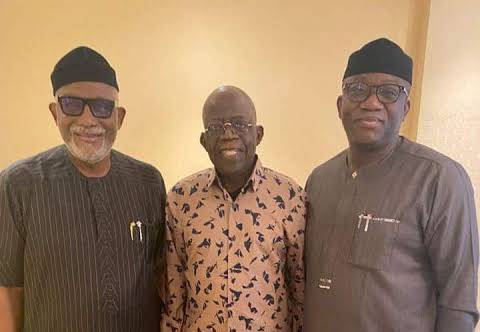 Tinubu posing with two APC governors in London
Two governors of the south west have visited the national leader of the All Progressives Congress, Bola Tinubu in London.
The ailing APC stalwart welcomed Governor Rotimi Akeredolu of Ondo State and his Ekiti State counterpart, Kayode Fayemi, in London, United Kingdom, where he is currently recuperating.
SaharaReporters had reported that the APC leader underwent two surgeries within a month.
The two governors among other discussions reportedly touched on political events in the country and the clamour for the South-West presidency in 2023 as well as the cementing of the emergence of Tinubu.
The duo were captured in a trending picture on Wednesday with Tinubu in London on a purported solidarity visit.
Asides Fayemi and Akeredolu, Lagos State Governor, Babajide Sanwo-Olu, Tinubu’s godson, had first visited the APC National Leader in July.
President Muhammadu Buhari also made a surprise visit to Tinubu in London where the former governor was seen leaning on a walking stick.
Also, a former National Legal Adviser of the APC, Dr. Muiz Banire visited the former governor of Lagos to express solidarity with him and to wish him quick recovery.
SaharaReporters had earlier in the month reported that Tinubu underwent a knee surgery at the John Hopkins University Hospital in Maryland, US.
The APC chieftain, it had been learnt, left the US for the United Kingdom on crutches, a few days after the surgery.
Sources close to Tinubu told SaharaReporters that he wanted the surgery in Paris, France but changed his plan over rumours of his death.
“Tinubu had his second surgery at John Hopkins University in Maryland recently. He was accompanied by a popular Nigerian doctor in Chicago. He had wanted the surgery in Paris but when rumour was rife about his death, he hurriedly left for Nigeria and went to John Hopkins,” one of the sources had said.
"He left the US for the UK on crutches," another source had revealed.
SaharaReporters had on July 31 reported that Tinubu, who had had several medical trips this year alone, had a surgery about two weeks earlier and could be billed for another one.
The APC National Leader has been off official and party functions in the country for a while, amidst talks that he is being positioned for the 2023 presidency to succeed the incumbent repressive regime of Buhari.
“Tinubu is hospitalised in Maryland, US. His health is failing. He couldn’t participate in launching his Arewa library, and he couldn’t participate in the Local Government Area elections last week. He could not attend today’s APC congress due to health reasons. He had a surgery last week,” an authoritative source had disclosed to SaharaReporters.
Top Stories