He also expressed deep disappointment in the approval of Femi Fani-Kayode’s defection to the party adding that he was ‘ashamed’. 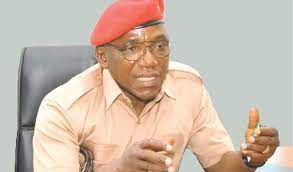 Dalung
Former Minister of Sports, Solomon Dalung has said he is ashamed to see Femi Fani-Kayode join the ruling All Progressives Congress.
He accused President Muhammadu Buhari and party leaders of being insensitive to Nigerians.
In a statement on Friday afternoon, Dalung stated that the party leaders have lost focus.
The statement read in part; “In the whole of my existence, I have not be ashamed of myself like yesterday, when I watched Femi Fani Kayode standing by the President in the State House in Abuja. I have have no problems with peoples political affiliations but I have issues with the manner the confidence and goodwill of Nigerians is been gambled with recklessly by clueless political elites.”
“Could recruitment of political liabilities in the face of raving insecurity that have claimed lives of many innocent Nigerians who voted for us be the priority now?. What has happened to humanity of APC leaders that we are so insensitive to the mode of the nation? If we have such political strategies of conquering political opponents like Ben Oyade, Umaihi, Matawale and Femi Fani Kayode, then why have we failed to deploy same to defeat boko haram, banditry, unknown gunmen, kidnapping etc?”
“It is evident from the body languages of APC leaders that the security and the walfare of Nigerians is inconsequential rather grabbing of power by fire by force in 2023 is a task that must be achieved. Nigerians do not deserve this treatment from a party that portrayed itself as populist merely to grab power and turned its back against them.”
“This wasn’t our mission when we mobilised Nigerians to trust us with power in 2015, we have a defined mission of fixing the country because we trusted the President based on his credentials but no right thinking founding member of the party can defend the current lost of bearing and direction staring at us.”
“As the country continues to bleed the only reaction of government is to insult the psychology of Nigerians with pictures of discredited political hawkers seeking refuge on political pilgrimages to Aso Rock. Or combative press statements from overzealous aides who usually throw caution to the winds.”
Top Stories