The man took it upon himself to be maintaining a bad road at Oyigbo in Rivers State and has been diligent with his work for 7 years running. 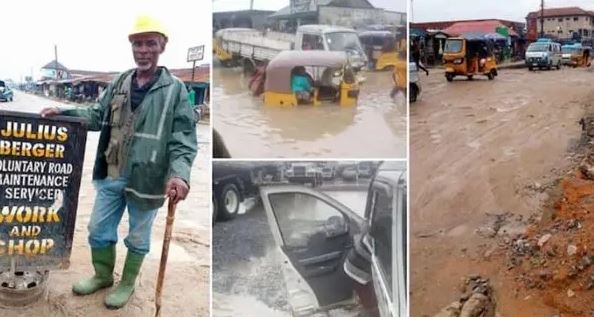 For the past seven years, a Nigerian man, identified as Alphonsius Ikem has fixed bad roads at Oyigbo in Rivers State.

His story was shared by Gist Ville, and it was gathered Ikem does the road maintenance work with assistance from two other persons without any remuneration attached.

Thanks to the man’s gesture, motorists have less to worry about when plying the route described as one of the worst in the state when it rains.

Ikem said money road users give him in appreciation, is used in getting stones and paying the persons who work with him. He noted that what he does is what any Nigerian should do.

They maintain the road by clearing the drainage system for easy passage of water and filling potholes with stones.