The official was harassed and slapped by the anti-Buhari protesters for meddling in the demonstrations and trying to dissuade the protesters. 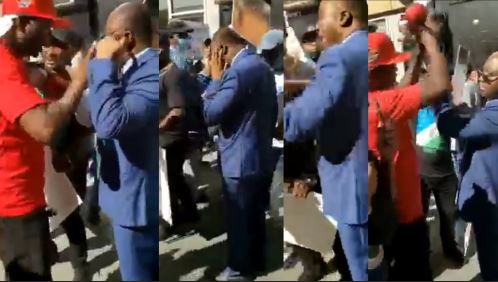 In what will come across as a rather startling development, some really aggrieved Nigerian protesters have been captured in a video slapping a top government official believed to be one of those who accompanied President Muhammadu Buhari to the United States.

The official was harassed and slapped by the anti-Buhari protesters for meddling in the demonstrations and trying to dissuade the protesters.

The video, obtained by SaharaReporters, showed the moment the official, clad in a blue suit, was scolded by the protesters, as he tried to convince them to leave the scene of the demonstrations.

The official, whose identity could not yet be ascertained, was seen approaching the protesters and shouting “I’m for One Nigeria” but he was resisted as the angry agitators shouted him down and eventually slapped him, for pushing one of them.

Meanwhile, in a video obtained by SaharaReporters on Saturday, the official standing in the way of the anti-Buhari’s government protesters was humiliated as he yelled, “I am for One Nigeria.”

One of the agitators then told the government official, “Mention three streets in the North. Get out. If you are for one Nigeria, go home. Go home. Go home. Go back to Nigeria and dress like this and let them see you. I just came back from Nigeria. Look at you, go and sit down.”

He was, however, slapped when he forced himself on the protesters and pushed one of them, which made the person filming to shout the more as he threatened to beat up the official.

Another protester said, “Respect yourself. You’re a useless man; such an unfortunate fellow. You’re a citizen, I’m a citizen too. We’ll beat you and nothing will happen.”

SaharaReporters had reported last week how three groups stormed the United Nations headquarters in New York, United States to stage protests as Buhari attended to address at the UN General Assembly, an event held for a week.

Two groups were in the US to protest against the ills of Buhari’s government while one was organised by a pro-Buhari clique to stand against his critics.

One of the groups, the Nigerian Indigenous Nationalities Alliance for Self-Determination, is headed by Yoruba Historian, Prof Banji Akintoye.

Also, activists under the aegis of TakeItBack Movement who mobilised for a protest at UN headquarters in New York were there to lay out their demands.

Meanwhile, a third group 'One Nigeria Group,’ was there, after the members were allegedly paid to express their support for the nation’s leader while promoting the concept of unity in diversity.

The renowned historian had accused the Nigerian government of sponsoring the counter-protest at UN headquarters, alleging that black foreigners living in the United States of America were “hired at $500 per head.”