It was gathered that some of the females among them were reportedly stripped and sexually harassed during detention by the campus security officials. 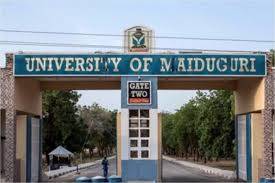 It has been reported that some students of the University of Maiduguri have sustained injuries while protesting the recent increment in tuition by the management of the institution, according to SaharaReporters.

SaharaReporters gathered that some of the females among them were reportedly stripped and sexually harassed during detention by the campus security officials.

The students were said to have embarked on a protest on Tuesday over a tuition fee hike by the varsity.

It was learnt that the female students joined their colleagues to register their displeasure over the living conditions in the school when security operatives stormed the scene to forcefully disperse the protesters, while arresting many.

“Female students protested to demand their needs but everything changed when the school security team interfered. They arrested the peaceful protesting students at their various hostels and at the Senate building.

“The students’ demands are as follow; Lack of electricity in some blocks inside the hostel, scarcity of water, increment in school fees, demand for release of the arrested peaceful protesters yesterday and insecurity in the hostels,” a student told SaharaReporters.

Meanwhile, in his reaction, A. M. Gimba, Dean of Students at UNIMAID, warned that the university management would deal with those trying to breach the peace on campus.

Gimba, in a circular also said that the management was observing the current situation with keen interest, adding that it would not tolerate unwanted behaviour by students or intruders trying to destabilise activities in the university.

“Consequent upon this, the effort has already been put in place to address issues raised especially those on security and power supply,” he said.

“Regarding those suspended from the hostel, they will return as soon as investigation is concluded. Students are therefore advised to be of good behavior and avoid acts that may lead to creating chaos on the campus.”