For instance, heavily armed police personnel, on Tuesday, took over the Lekki tollgate area, which was the hotbed of last year’s protests. 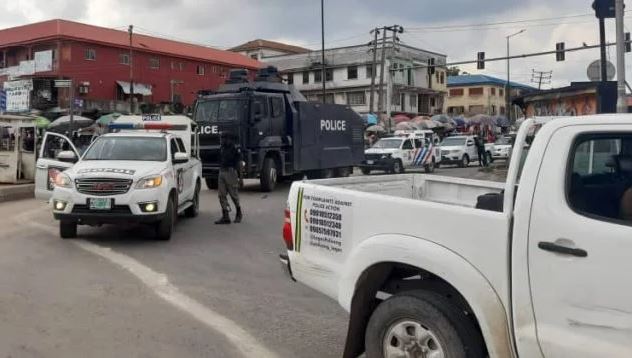 According to a report by The PUNCH, there are strong indications that security agents and protesters will clash in many cities across the country today (Wednesday).

This is because activists and youths insist on gathering in public spaces to commemorate the first year anniversary of the #EndSARS protests, which rocked the nation last year.

For instance, heavily armed police personnel, on Tuesday, took over the Lekki tollgate area, which was the hotbed of last year’s protests.

The PUNCH also learnt that some policemen in plain clothes would join the protesters in a bid to monitor them closely.

In October last year, spontaneous protests had erupted in different parts of the country against police brutality, especially by the personnel of the notorious Special Anti-Robbery Squad, and the #EndSARS movement soon garnered international support.

The protests, however, turned bloody on October 20, 2020, when soldiers and policemen fired at the protesters in Lagos.

In Abuja, the nation’s capital, hoodlums attacked the protesters and injured many of them. They also looted warehouses and set ablaze over 18 cars and vandalised more than 12 vehicles.

In response to the outcry, the regime of the President, Major General Muhammadu Buhari (retd.), disbanded the Special Anti-Robbery Squad police unit, the fourth time the Federal Government had disbanded it.

On October 19, 2020, the President accused the protesters of trying to cause anarchy and warned that the government would not tolerate that.

The police have, however, warned the organisers and attendees of the commemorative protests to desist from going ahead with their plans as they will be arrested and prosecuted.

In Abuja, The PUNCH gathered on Tuesday that the police would deploy personnel at strategic locations as part of plans to frustrate youths from staging street protests in commemoration of the rally.

Our correspondents also learnt that security would be tightened around many public buildings and infrastructure in the FCT.

It was gathered that the Unity Fountain, which is the main protest spot in Abuja, would be cordoned off to prevent any form of gathering there.

A source said, “The security agencies are not very comfortable with plans by some emergency activists to stage a protest. So, we have put in place a plan of action to ensure that the protest or street walk doesn’t degenerate into violence.

“I won’t be able to disclose our strategic plan, but suffice it to say that security will be beefed up at strategic locations and government offices, banks and other public utilities. Many undercover operatives will also be part of protesters to fish out troublemakers among them.”

In Lagos, personnel of the state police command embarked on a show of force on Tuesday to intimidate the organisers and participants of the #EndSARS memorial protests in the state.

There was heavy police presence at the Lekki tollgate.

A notice from the organisers of the protest sighted by one of our correspondents read, “In memorial of the lives lost on the 20-10-2020, there will be a memorial car procession on Wednesday, October 20, 2021, taking place at the Lekki Tollgate by 8.10am. We should all endeavour to stay in our vehicles throughout the procession.”

In Oyo State, the organisers said the commemorative protest would start by 9am at under the bridge, Iwo Road, Ibadan, while a candlelight procession would follow at the Ojoo roundabout by 4pm.

“There will be a morning walk for #EndSARS heroes by 9am at Iwo Road, under bridge, opposite Tantalizers with a candle light procession at 4pm at Ojoo roundabout, Ibadan,” a notice by the organisers read.

The Lagos State Police Command, however, said no form of street protest in commemoration of the #EndSARS anniversary would be tolerated in any part of the state.

The state Police Public Relations Officer, CSP Adekunle Ajisebutu, in a statement on Tuesday, dispelled the rumour circulating on social media that the police had agreed to allow street demonstrations to commemorate the #EndSARS protest anniversary scheduled to hold today (Wednesday).

He said the command would only allow indoor and virtual events in commemoration of the anniversary.

Ajisebutu said, “The attention of the Lagos State Police Command has been drawn to a post being circulated on social media insinuating that the police in Lagos have agreed to allow street protests in commemoration of the one-year #EndSARS anniversary on October 20, 2021.

“On the contrary, the police will only allow indoor and virtual events in commemoration of the #EndSARS anniversary and will provide adequate security at the venue(s) if known. This is in recognition of the rights of every Nigerian to express his or her interest.

“We wish we could permit such street protests. However, intelligence at our disposal has revealed plans by some faceless groups or individuals to stage an anti-#EndSARS anniversary protest in the state on the same day.

“In view of the conflicting interest between the pro and anti-#EndSARS anniversary groups and threat to cause mayhem, the command once again warns both groups against any form of street protest between now and October 20, 2021 and beyond.”