As part of its job, the panel will also ascertain whether the developer, contractor and statutory regulatory agencies compromise on the building codes. 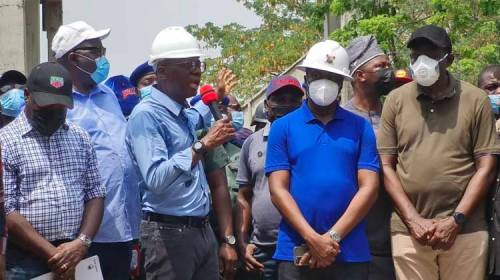 Babajide Sanwo-Olu at the scene of the incident

A report by SaharaReporters has shown that a six-man independent investigation team has been inaugurated by Lagos State Governor, Mr. Babajide Sanwo-Olu on Thursday, to investigate the remote and immediate cause of the collapse of a 21-storey building in Ikoyi.

The panel is expected to submit its reports within 30 days.

As part of its job, the panel will also ascertain whether the developer, contractor and statutory regulatory agencies compromise on the building codes.

The name of members of the probe panel was released on Wednesday at the scene of the incident by Sanwo-Olu, with the list comprising professional builder, town planner, structural engineer and legal practitioners – all from the private sector.

According to the New Telegraph, President of Nigeria Institute of Town Planners (NITP), Mr. Toyin Ayinde, is the chairman of the panel, while Ekundayo Onajobi, a lawyer in a private law firm, is the Secretary.

The panel was charged to explore all angles to determine the cause of the collapse.

While addressing the press during his second visit to the site on Wednesday, Sanwo-Olu read out the names and ages of the survivors who were found under the rubble.

Six of the nine survivors are currently undergoing treatment while three have been discharged, the governor stated.

Below are the names of the survivors, as announced by the governor.

The Governor disclosed that three survivors had been discharged, but did not specify their gender or give any further details about them.

Meanwhile, the death toll from the incident has risen to 38.