The B-52 Stratofortress, according to the report, took off from RAF Fairford, a Royal Air Force station in England. 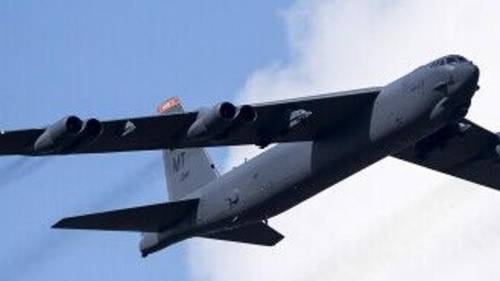 CNN reports that the United States has flown its B-52 Stratofortress bomber, the Air Force’s largest strategic bomber over NATO’s Eastern flank.

The US on Friday conducted the exercise alongside German and Romanian militaries as a sign of unity in the second weekend of the war in Ukraine.

The B-52 Stratofortress, according to the report, took off from RAF Fairford, a Royal Air Force station in England.

The exercise in the Romanian airspace put the bombers right on the edge of NATO countries, adjacent to Ukrainian air space.

Meanwhile, the Russian Air Force is trying to establish air supremacy in the Ukrainian Air Space as the war rages on between the two neighbours.

“BTF rotations give us a critical opportunity to integrate and train with our allies and partners, especially during this difficult time,” Jeff Harrigian, commander of United States Air Forces in Europe, Air Forces Africa, and NATO’s Allied Air Command stated.

“Training together ensures the defensive power of NATO remains unmatched,” he said.

Meanwhile, US intelligence said over 200 Russian mercenaries have been killed in Ukraine.