On Wednesday, Umahi confirmed that he has engaged the services of no fewer than 18 SANs. 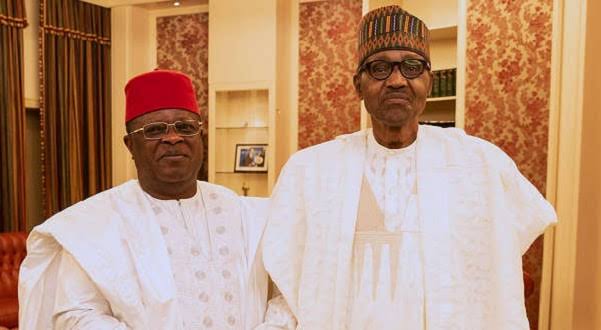 Dave Umahi and President Muhammadu Buhari
Sacked Ebonyi State Governor, David Umahi has hired 18 Senior Advocates of Nigeria to defend him in court.
This comes after he was removed by Justice Inyang Ekwo of the Federal High Court alongside his deputy, Kelechi Igwe, on Tuesday for dumping the Peoples Democratic Party to join the All Progressives Congress.
Justice Ekwo had, in a judgment on Tuesday, restrained Umahi and Igwe from parading themselves as governor and deputy governor of the state on the grounds that they contested the 2019 governorship poll on the platform of the Peoples Democratic Party.
On Wednesday, Umahi confirmed that he has engaged the services of no fewer than 18 SANs.
The governor also denied attacking the judiciary, pointing out that the lawyers of the PDP did the ‘hatchet job’, and not Justice Ekwo.
Umahi stated this, in Abakaliki, during a solidarity rally in his support, on Wednesday.
“There is no need to entertain any fear. Go about your business very peacefully and let me assure the NBA Chairman that he is a perfect gentleman and that we will never insult the judiciary, we have confidence in the judiciary and I know they will do the right thing and we have engaged eight SANs to proceed to Abuja, we have engaged 10 SANs to produce to Enugu,” Umahi stated.
Top Stories