We Now Live In Fear After Terrorists Killed 38, Burnt Our Houses – Survivors Of Kaduna Attack Lament


Bearing arms and machetes, with jerry cans of petrol, the attackers shot aimlessly at the villagers, torched their houses and chased them out of their ancestral land. 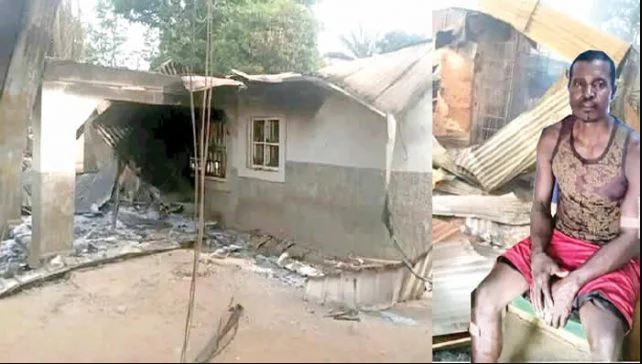 As night fell slowly and the daylight faded out to welcome the night stars on Sunday, March 20, 2022, residents of Agban Kagoro in the Kaura Local Government Area of Kaduna State had unexpected but regular visitors.

Bearing arms and machetes, with jerry cans of petrol, the attackers shot aimlessly at the villagers, torched their houses and chased them out of their ancestral land.

Before the attack that evening, Jonathan Bulus, a primary school teacher with the Government Primary School, Kaura, said he was enjoying the cool breeze of the evening and chatting with his brothers when tragedy struck.

The 32-year-old teacher told Saturday PUNCH that it was an everyday ritual for him and other villagers to sit outside to discuss soccer or the state of the nation since there had always been power outages in the community.

But, this Sunday, at around 7.15 pm, just as the crickets in the surrounding bush began to whisper, their evening ritual was disrupted by these attackers, causing bloodshed and wanton disruption to their lives.

Narrating the harrowing experience, Bulus said the invaders, numbering over 30, sprang from nowhere and started shooting directly at them, killing many and leaving others wounded.

Bulus stated, “Everything happened so fast. As we sat outside, chatting as usual, the armed herdsmen came in from many directions and started shooting at us.

“The gunshots were targeted at our community. Everyone started to run even though most of us were not properly dressed. Many houses were burnt because people were running for their dear lives. Anybody who chose to stay knew they would surely meet their death.

“We are used to these attacks by these armed herders and bandits but this very attack was beyond every other attack we had ever experienced in this community. We lost 34 of our people and many others were injured. We that are still here are forced to face the sad reality of a thwarted destiny. We now live in fear because we don’t even know if they will be back.”

According to the official figures released by the Kaduna State Commissioner for Internal Security and Home Affairs, Samuel Aruwan, who confirmed the incident on Tuesday, four locations; Tsonje, Agban, Katanga and Kadarko, all within the Kagoro Chiefdom were attacked that night.

Aruwan also noted that over 200 houses and 32 shops were burnt during the attack while three vehicles and 17 motorcycles were vandalised.

Among the dead was a 43-year old teacher, Godwin Latung, who is Bulus’ cousin. The married teacher with two kids had just been transferred from Kwoi in December 2021 and three months later met his sudden death in the course of doing his job at the Government Secondary School, Kagoro.

Speaking to our correspondent in a video call on WhatsApp, his wife, Blessing, a trader based in the state capital, said she did not believe her husband was dead even as she watched him being buried on Monday morning.

“I saw his body, but I still cannot believe that he is dead,” she said. “What will happen to our two children? His mother is even old and we didn’t expect this. We haven’t even told her. That woman has suffered for him. He was the only son.”

Bulus said he and Latung were together that evening before he left to go and see his mother.

“It was on his way the attackers met him; they shot at him and inflicted machete cuts on him. His remains showed that he had deep wounds and he bled to death. Everybody now lives in fear,” Bulus said.

Another resident who claimed to have witnessed Latung’s killing from his hideout told our correspondent, “We were running to safety together but he turned back to go and get some of his children’s property because they had just left his home after their mid-term break.

“As he went back, we ran into a nearby bunker we had dug and saw as the attackers accosted him and shot him. The others inflicted machete cuts on him and kept shooting into the air as they searched for more people to kill.

“He was attacked by these armed Fulani and he got killed. His house alongside many on that lane was also completely razed, not even a pin was retrieved. Everything got burnt. Now everybody is scared.”

The resident noted that with the way the attackers went about killing people, they never believed they would survive the attack. “It was well planned and it went on for well over four hours; they came around 7.15 pm and left around 12am after much damage,” the resident noted.

Official statements from the Kaduna State Government and the state Police Command noted that the attackers were bandits, a statement the survivors disagreed with.

Bulus said, “These people were Fulani herders. Nobody can tell me otherwise.”

Another survivor, who refused to disclose his name for fear of being attacked in case the attackers come back, also claimed they were Fulani herdsmen, saying it was not the first time the attackers visited the community.”

Asked how they knew the attackers were Fulani herdsmen, Bulus said, “Even a small child would recognise a Fulani man. From the attacks, some of us in our hideouts saw and heard these people when they were shooting and burning houses. They spoke in their language. From their accent, we could tell they were Fulani.

“They used to come in broad daylight.  Before the incident that Sunday, they had come on Thursday during the day.  They were in a show of force and were exchanging bullets around our community border but could not penetrate because we were resisting them.

“I think that was why they came with strong reinforcement and with more sophisticated weapons. As they were shooting, they were chanting in Fulani. With that, we could tell they were the ones who came that Thursday.

“One of them left their phone and we picked it up, and the wife kept calling. When we answered the call, we could hear from her accent that she was Fulani.”

The people of Southern Kaduna are not new to these kinds of attacks by armed men who usually come, sometimes announced, to plunder communities unhindered.

For example, on February 2, 2022, Sunje, a neighbouring community near Kagoro, was attacked by gunmen.

They reportedly came around 11am and shot at the villagers, dispersing them; stealing their valuables and torching houses for hours.

In December 2021, three communities: Kauran Fawa, Marke and Riheya – in Giwa Local Government Area, were attacked and 38 persons were confirmed dead by the Kaduna State Government. Only 29 were accounted for; nine could not be accounted for till date.

The attack, according to an eyewitness account, lasted for hours.

The preceding Sunday, about 51 persons were killed by gunmen in Kaura while many houses were also set ablaze.

Respondents told our correspondent that the crisis began as a form of land dispute between the indigenes and the Fulani who lived in the community.

Bulus, for instance, alleged that the herders wanted to take over their ancestral lands for grazing.

He said, “Sometimes, when we go to the farm, we meet them there. They would attack us with their guns and since we are defenceless, we would watch as their cattle consume our crops. We couldn’t do anything about it. We would plant and their cattle would graze on the farm, destroying everything.

“We dare not challenge them, because if we do they will kill us. It is as if they want to take over our land. This is our ancestral home. We don’t have any other place.

“We grew up to know this place as our land. Now, they want to claim it. Where do they want us to run to? Even if it means dying to protect our land, we would do that. However, we keep pleading with the government to come to our aid.”

The youth president of the Southern Kaduna Peoples Union, Isaac John, had told our correspondent in an interview that it would seem that the aim of the attackers was to take over their land.

“That is the issue, and as it stands now, communities have been razed and occupied by these bandits. They are making attempts to rename those communities. For instance, Chief Agwolmadara, one of the paramount rulers of Southern Kaduna, was kidnapped and murdered.

“As we speak, there are emirates inside Kaduna and there are some communities where chiefs have not been appointed till date. So, we see a situation where they kill our people and target our traditional institutions. The idea behind this, I feel, is that once this traditional institution is wiped out, the emirate system will come on board and the narratives would be changed.”

He lamented that the situation in Southern Kaduna was beyond what was being described as conflict and banditry. He said it would be right to describe the attacks as genocide.

“These things continue on a daily basis. These terrorists come into our communities whenever they like, rape our women, kill our men, destroy our farms and go scot-free like they have done nothing wrong,” John said.

Following the Sunday attack, the Kaduna State Government slammed a 24-hour curfew on Jema’a and Kaura Local Government Areas, saying the curfew was meant to prevent further breakdown of law and order in the affected areas.

“Two military personnel were among the 34 killed, with local residents making up the 32 casualties. One Mrs Abigail Joshua from Adan community is currently missing.”