When the interpreter was still trying to present his words in English language, the preacher suddenly slumped with the microphone in his hand. 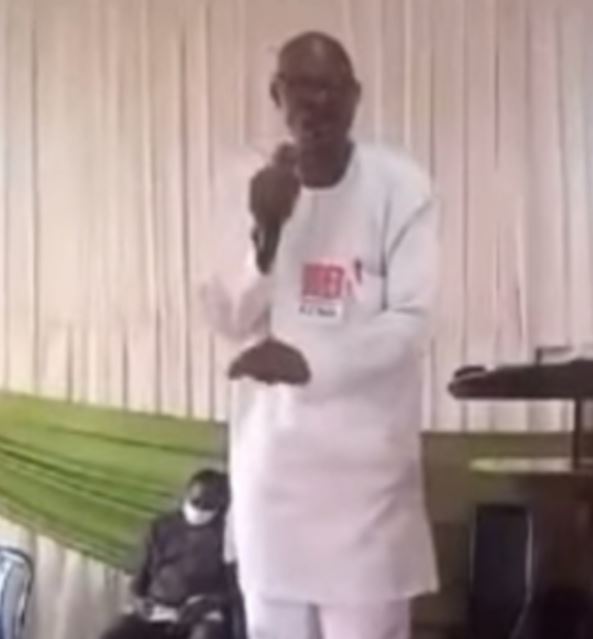 There was palpable tension as a Deacon at the Evangelical Church Winning All (ECWA), Onikoko, Abeokuta, Ogun State, collapsed and died while preaching in the church on Sunday.

The Deacon, Chief Francis Oluwole Ogunnusi was the Baale of Onikoko community, near Panseke area of Abeokuta.

It was gathered that Ogunnusi was at the pulpit on Sunday preaching against the ‘get-rich-quick’ syndrome that has become the order of the day in different parts of the nation.

In a video, the Deacon warned those killing people and drinking human blood to get rich, saying when they died, the money would be taken by another person.

Speaking in Yoruba, the community head said, “The money you make through unlawful means, killing people, sucking human blood; when death comes, it will belong to another person.”

However, when the interpreter was still trying to present the words in English language, the man suddenly fell heavily with the microphone in his hand.

This led to commotion in the church hall, as people ran to carry him to the hospital.

A member of the church, who did not want to be mentioned, said the man was rushed to the Federal Medical Centre, Idi-Aba, Abeokuta, where he was pronounced dead.

“The man was not the pastor of that church, he was just an elder. He was the Baale of Onikoko. But he was the one that delivered the sermon on Sunday.

“He was talking about death and people who make money by killing other people. All of a sudden, he collapsed. He was rushed to the FMC, but he died. We don’t know what happened. I was very scared. Everything was disrupted. We just shared the grace and went home,” the worshipper said.

The source said he would not know whether or not the man had any health challenges before his sudden death on Sunday, adding that the deceased preacher must be between 60 and 70 years.

It was gathered that the church at Onikoko is the headquarters of ECWA in Ogun State.

The lifeless body of Chief Ogunnusi has been deposited in the mortuary, it was gathered.