The Vice President served eight years as Attorney-General and Commissioner for Justice in Lagos when Tinubu was the governor between 1999 and 2007. 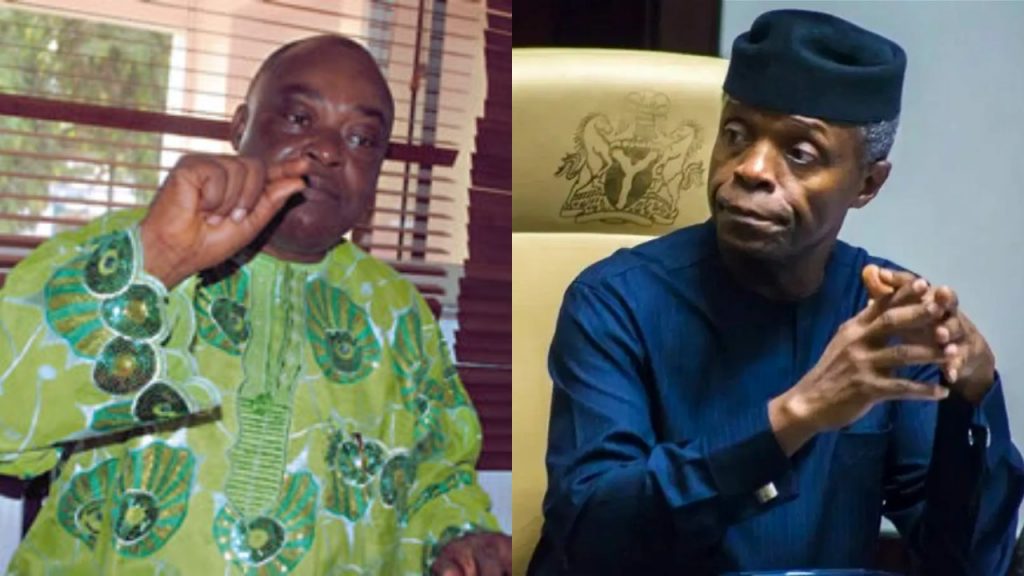 Eze Chukwuemeka Eze, a Chieftain of the All Progressives Congress, APC, has described Vice President, Yemi Osinbajo’s expression of interest in the 2023 presidential race as immoral and unacceptable.

Eze, in a statement he personally signed and forwarded to DAILY POST on Sunday, said the declaration of Osinbajo “is a clear tale of treachery perpetrated against Bola Ahmed Tinubu, a former Lagos State Governor, a man whose political career is built upon demanding unctuous loyalty from his allies and who now feels wounded over the shabby betrayal of a Senior Advocate, who rode to power through his large wings of political magnanimity.”

He said after reading through what he called “flimsy and watery reasons” given by Osinbajo to contest the 2023 presidential election, he found it a reasonable obligation to let the world know that such declaration smacks of a very perceptible tincture of political infidelity against his all-time benefactor, Tinubu, who has nurtured a lifelong aspiration for the presidency.

Recall that Osinbajo had last week joined the 2023 Presidential race, despite an earlier declaration by Tinubu.

The Vice President served eight years as Attorney-General and Commissioner for Justice in Lagos when Tinubu was the governor between 1999 and 2007.

Tinubu is generally believed to have nominated Osinbajo as the running mate to Muhammadu Buhari in December 2014.

“The same zone has existed for twelve years since the fourth Republic occupied the Speakership of this country for over eight years through Hon. Patricia Etteh and Hon Dimeji Bankole from 2007 to 2011 with the incumbent Speaker Hon. Femi Gbajabiamila will spend four years by 2023,” Eze’s statement read in part.

“With this development, considering the fact that South East region has not since the inception of the 4th Republic occupied the seat of the President or Vice President of this country and considering that the South-South region has only through Dr. Jonathan Goodluck occupied the exalted office for only five years, it will be immoral and unacceptable that Osinbajo or any other aspirant from the South West would be contemplating of getting the party’s flag for the Presidency against the southeast and south-south regions of this country in 2023,” he said.

Eze also reminded Osinbajo that he would have also occupied the post of Vice President from the same South West for eight years come 2023.

According to him, for these reasons and many others, Osinbajo should withdraw his interest as a matter of urgency and save Nigeria the embarrassment his unlikely emergence would cause the country.