When the suspect was apprehended, he was beaten blue-black by the mob before he was rescued. 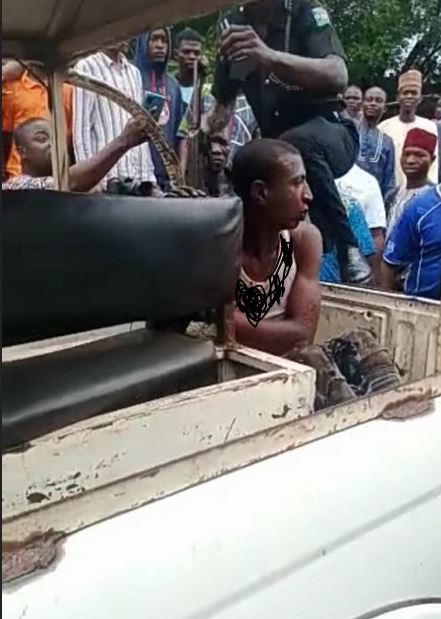 Operatives of the Ogun state police command rescued a suspected kidnapper from being lynched by an irate mob at Idi-Ori area of Abeokuta North Local Government of the State.

Dailypost reported that the suspect was walking around the area when he was reportedly recognised by one of his victims.

The victim, who raised the alarm, recalled that the suspect had received ransom from him and others in the area.

An eyewitness, who identified herself simply as Olubukola, disclosed that irate youths at Idi-Ori, descended on the young man, beating him blue and black.

“They tied his hands and legs. They beat him and gave him a ‘bloody nose’. He might have been lynched if not for the arrival of the police from Lafenwa division in Abeokuta.

“At first, the irate youths did not want to release him to the police. They said they didn’t trust the police. Their fear was that he might be released on bail. They insisted that they’re very sure he was a kidnapper,” Olubukola explained.

However, Oyeyemi said the man remains a suspect as investigation is still ongoing about the allegations levelled against him.

He condemned the attempt to lynch the suspect, saying the law does not permit anybody to take part in jungle justice.

According to Oyeyemi, if the man is a kidnapper as being said, police investigation would unravel his accomplices, saying he could not have been the only one in act.

“I am aware of the incident. The man is still a suspect until investigation is concluded. That is why it is not good for people to be taking laws into their hands. You cannot just carry somebody and make attempts to kill the person. They should let us investigate his culpability.

“And even if we are able to find out that he is a kidnapper, he cannot be alone. Our investigation will lead us to the arrest of others. So that in that axis, the syndicate will be dismantled once and for all. People should stop taking laws into their hands,” Oyeyemi said.