Some hired guns and influencers who benefitted from the ponzi scheme perpetuated by Imu Ovaioza Yunusa have been exposed. 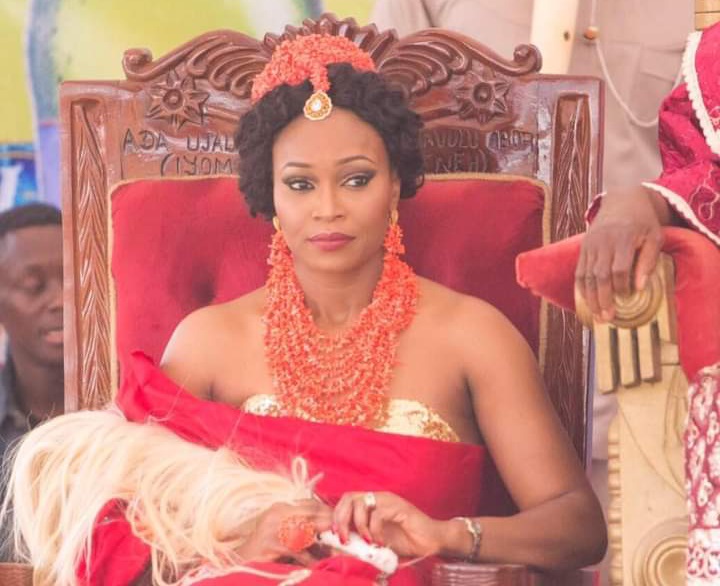 A detailed report revealing names, posts and how influencers helped Imu Ovaioza Yunusa reportedly scam thousands of investors billions of naira has been made public.
Here is the full investigative report by FIJ.
Imu Ovaioza Yunusa, the founder and CEO of Ovaioza Farm Produce Storage Business (OFPSB), was recently given the nickname ‘Facebook Yahoo Girl’, after she allegedly defrauded numerous investors to the tune of several billions of naira.
Ovaioza was arrested on April 18 by police officers from the Force Criminal Investigations Department (FCID), Abuja, while attempting to flee the country with her husband.
However, before her arrest, and while the ‘business was still booming’, she ‘hired’ several social media influencers to help promote her ‘brand and business’.
One of such influencers is Ada Ujaligwa, a verified ‘public figure’ with over 100,000 followers on Facebook. 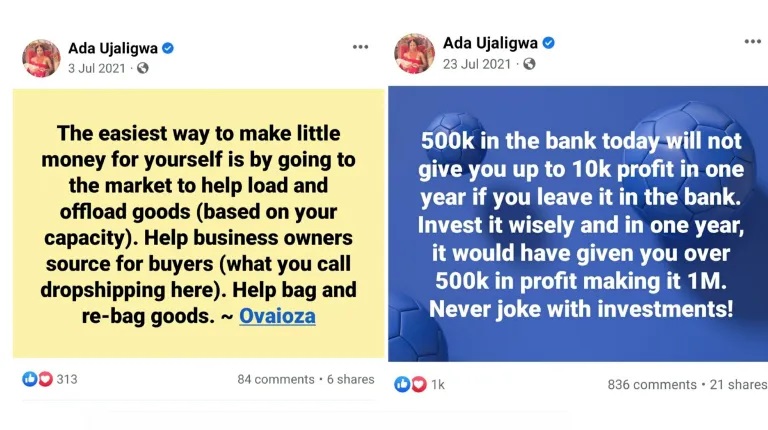 On many occasions, Ujaligwa made several posts on her page, promoting Oviaoza’s business, and encouraging all her followers to invest in it.
With over 60,000 followers on Facebook, Lami Tanko, a brand strategist, was another influencer who benefitted from the scheme. Tanko once made an appreciation post, thanking Oviaoza for a shopping spree and for the money she sent her. 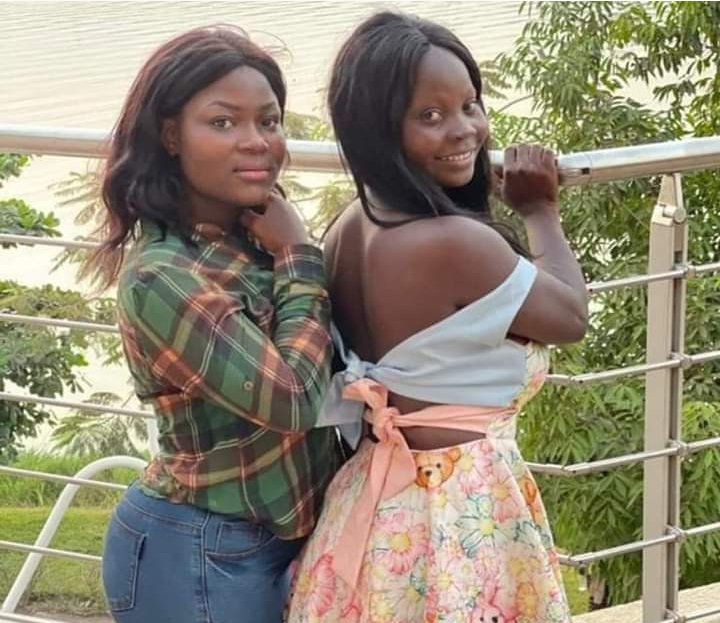 However, when it became clear Oviaoza was a fraudster, Tanko quickly distanced herself from the activities of OFPSB, saying she was never a friend of its CEO. She also recently claimed the public appreciation she once posted to thank Oviaoza was just a ‘stunt.’ 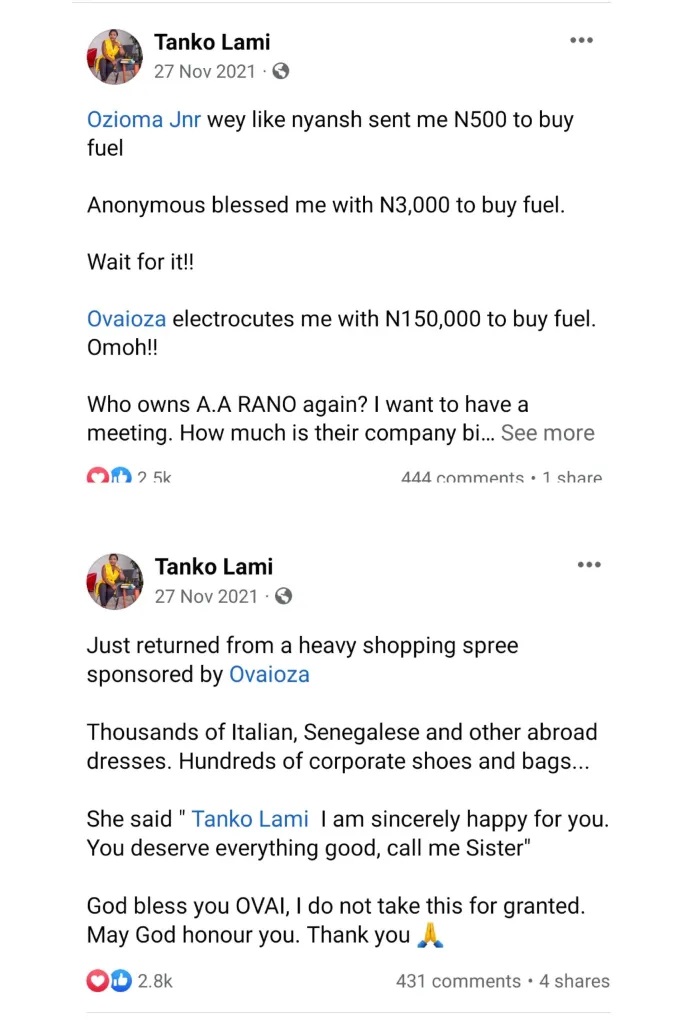 Okafor Christabel, a content creator with over 15,000 followers on Facebook, was recently a recipient of N1 million from Oviaoza, for being the first-runner up in an online contest that had nothing to do with OFPSB. 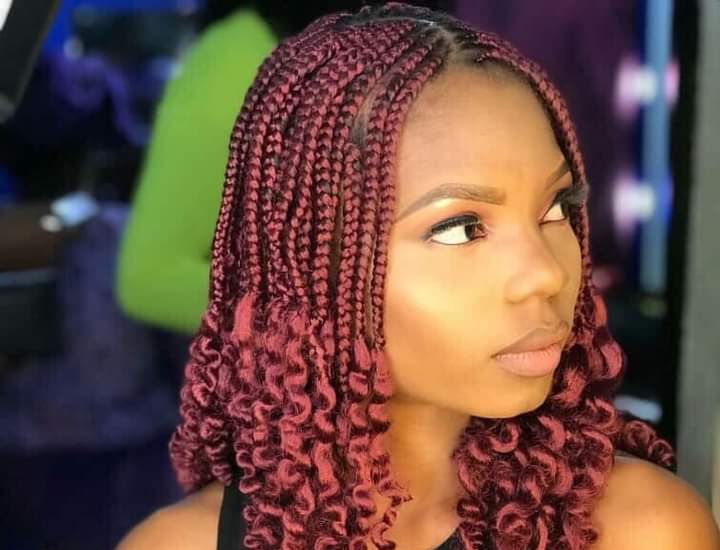 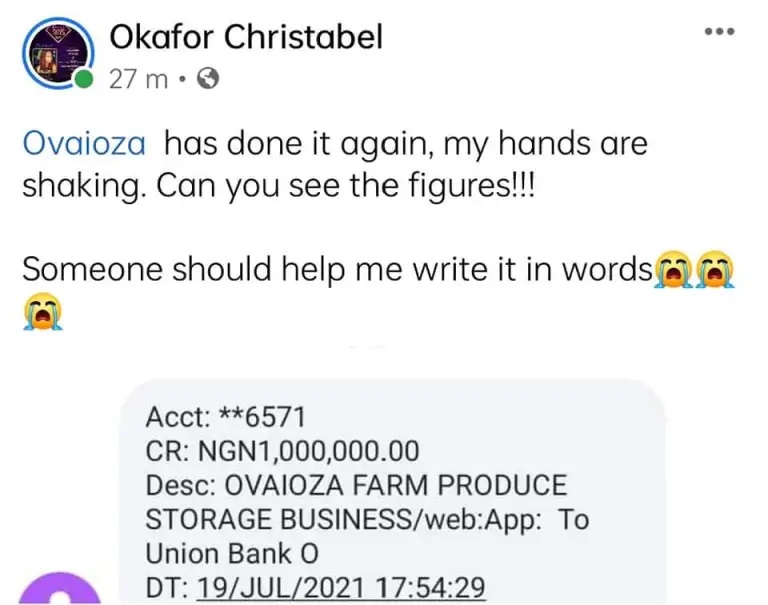 The prize money Okafor went home with from the actual organisers of the competition was N150,00.
Nwa Okpoko, Ovaioza’s lawyer and adviser, also recently received a car gift from OFPSB’s CEO, whom he fondly calls ‘Wire Wire’, and her husband.
“Yesterday evening, Wire Wire and her man, David, pulled up in my house in two cars. I didn’t even get the memo till they D (David) got out of this Benz and handed the key to me,” he wrote in a post. 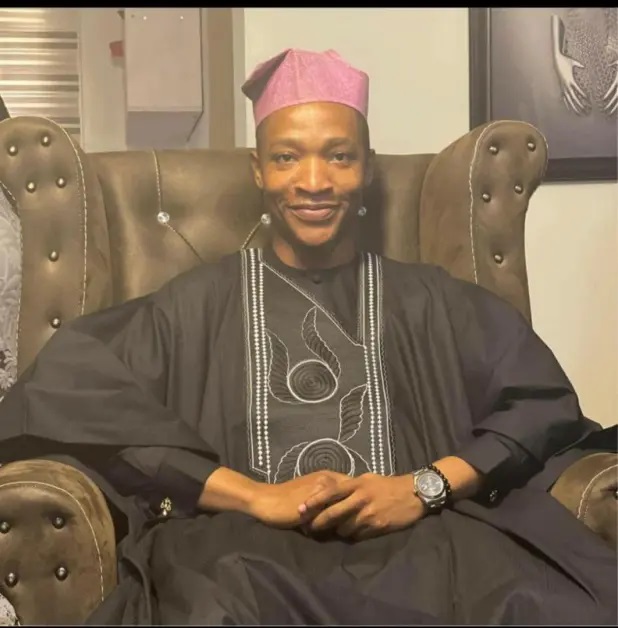 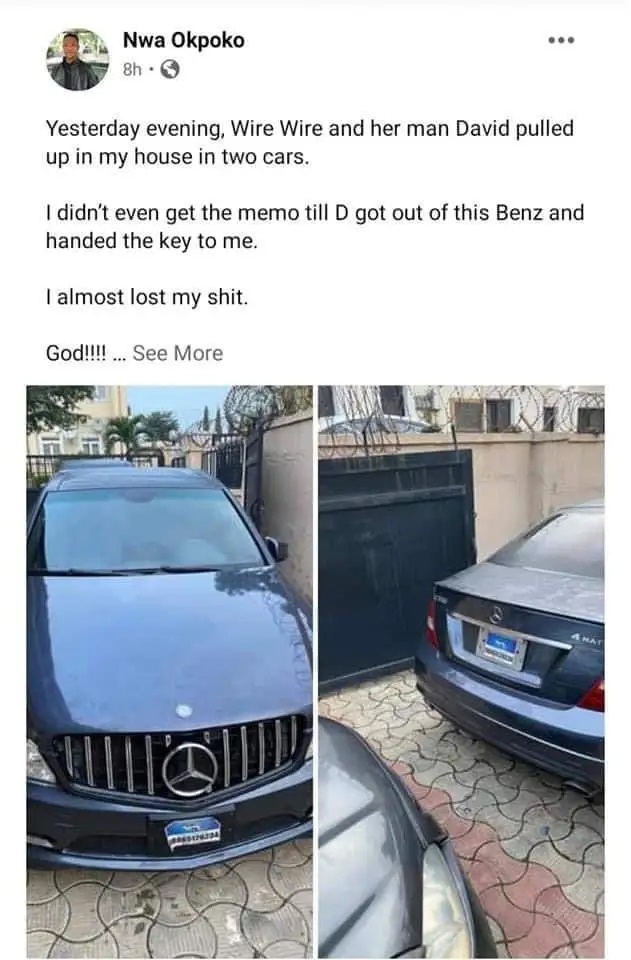 Gail Chukwu, also known as Gail of Lagos, a screenwriter with over 15,000 followers on Facebook, was also one of Oviaoza’s associates and promoters.
“I remember listing five things I wanted, to move my vlog forward, and asked the universe to make it happen,” she said in a December 2020 post. 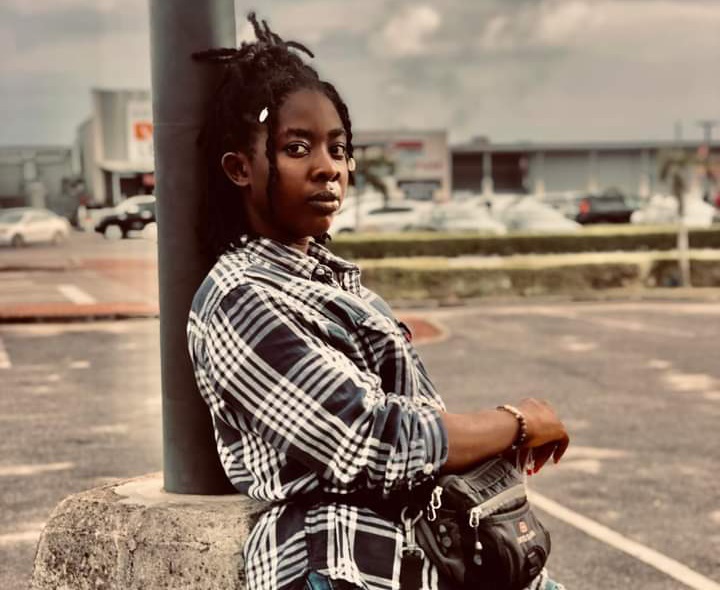 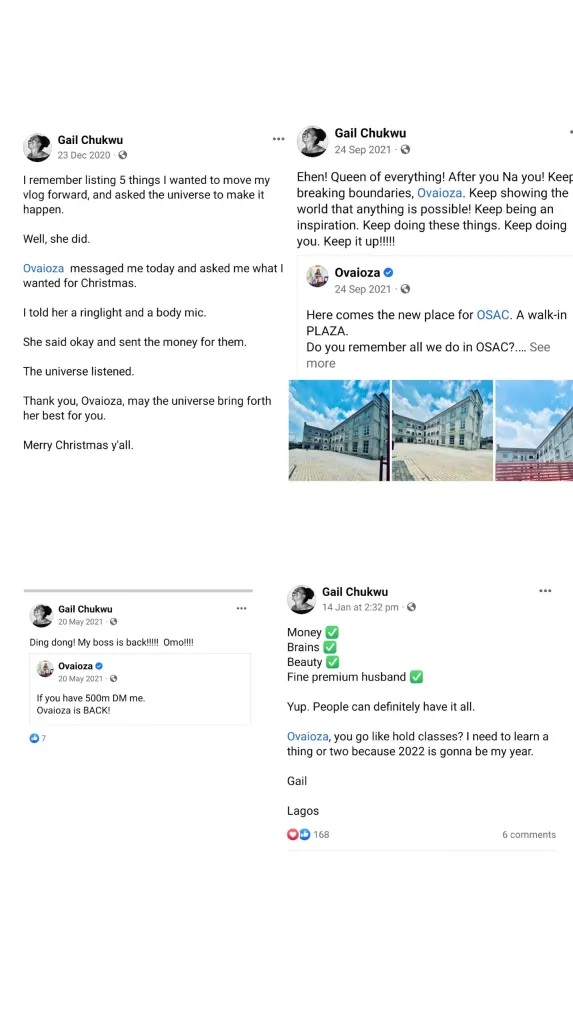 “Well, she did. Ovaioza messaged me today and asked me what I wanted for Christmas. I told her a ring light and a body mic. She said okay and sent the money for them.” 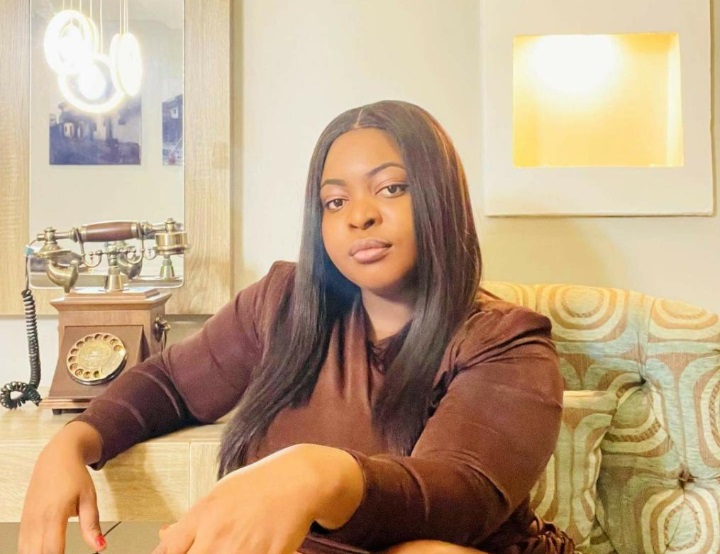 Marline Oluchi is another influencer, known to have close ties with Oviaoza.
At different times, both of them had shared pictures of themselves hanging out and traveling together.
They are also constantly praising each other on their respective profiles. Recently, Marline confessed to encouraging people to invest in the business, when she recently came out to reveal the truth about Oviaoza’s business.
Recently, Marline confessed to persuading people to invest in the business. She made the confession while revealing the truth about how Oviaoza had squandered her investors’ billions. 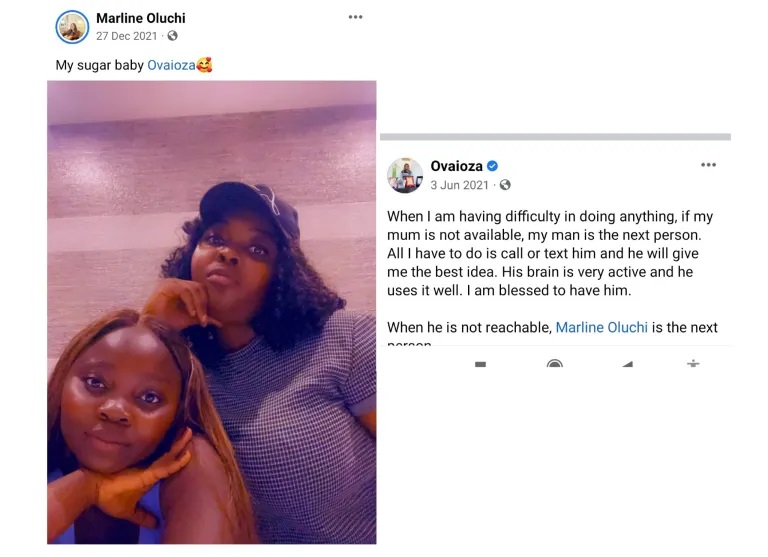