The gang members were apprehended after two of their members led the security operatives to their hideout. 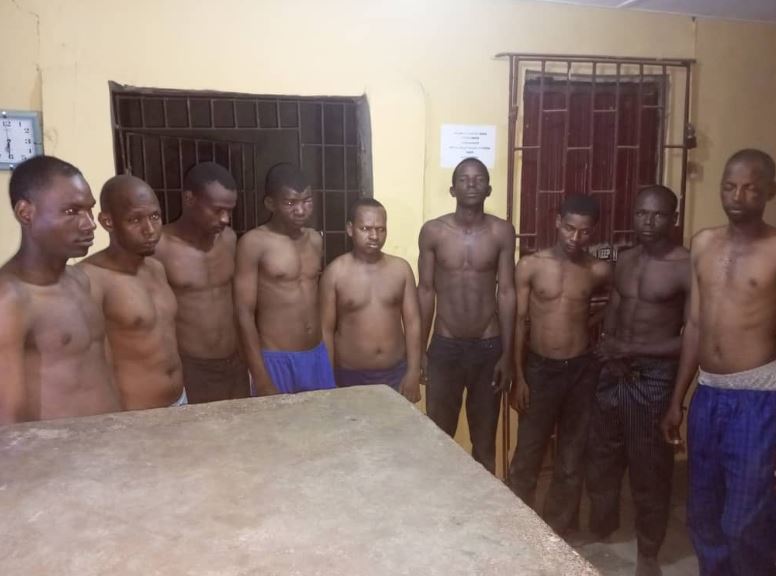 Men of the Ogun State Police Command, in collaboration with local hunters, so safe corps, OPC, vigilante and men of Amotekun corps have apprehended nine members of a kidnap syndicate terrorizing Abeokuta Ayetoro road on Sunday, April 24th in their hideout at Abule oba, off Ayetoro Road, Abeokuta.

Upon the information, the DPO Sabo/Ilupeju division, SP Mustapha Opawoye, quickly moblised his men and moved to the area, where the duo of Hammed Taiwo and Kehinde Jimoh were apprehended.

On interrogation, they confessed been part of the syndicate, but their own role is to run errands and watch the environment to prevent law enforcement agents from getting to them unaware.

Their confession led to the discovery of the hideout of group at Abule oba, off Ayetoro road, where they always met after collecting ransom from their victims.

Having discovered the hideout, the DPO mobilized his men,so safe corps, OPC men, local hunters and men of Amotekun corps and subsequently stormed the place where all the nine members of the syndicate were arrested.

Confirming their arrest, DSP Abimbola Oyeyemi, spokesperson of the state police command, said preliminary investigation revealed that, the suspects are the group terrorizing Abeokuta/Ayetoro road in recent time. Some of their victims have been able to identified them as their abductors.

Meanwhile, the state commissioner of police, CP Lanre Bankole, has expressed satisfaction about the intelligence-based investigation carried out by his men which led to the arrest of the hoodlums and has ordered the immediate transfer of the suspects to anti-kidnapping section of the state criminal investigation and intelligence department for discreet investigation.