Balogun said he forgot his padlock key to his motorcycle and was on the way returning back after picking the key when he received a call about the incident. 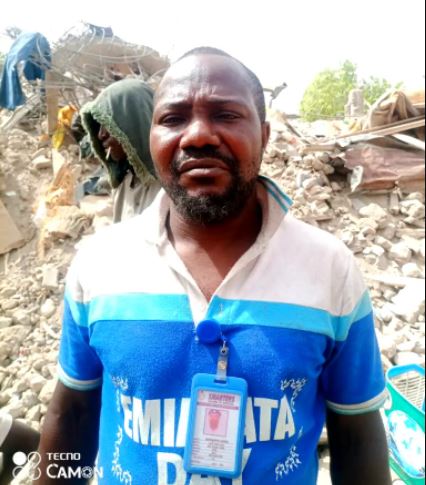 Abulkareem Adam Balogun, a furniture shop owner, in building that collapsed as a result of explosion in Aba road in Sabon Gari, Fagge Local Government area of Kano State has narrated how he narrowly escaped death after the explosion that went off on Tuesday, Vanguard reports.

Balogun in an exclusive interview with Vanguard on Wednesday near his destroyed shop said he forgot his padlock key to his motorcycle and was on the way returning back after picking the key when he received a call about the incident.

“I usually come out early and mostly first to arrive shop because I have a shop where I make furniture over there. Usually, when I come I park my machine and lock it. Yesterday, Tuesday, I was on my way coming when I forgot my key to the padlock of my machine. I had to go and pick it. I was on my way returning back and at Ibrahim Taiwo road when I received call from my brother about what happened.

“Around the area, we have welder (an Igbo man) who only uses electricity for his welding and not gas. Anytime he is called for any work, he ask the customer if they have stable electricity to power his equipment and do the welding.

“And there is an Igala man selling Chemicals used for lamination of pictures.

“There is also a vulcanizer here who use to sit together here. So when I came, the vulcanizer told me that someone called him for patching. He stood up and attended to the customer. He was done with that when another called him before the explosion happened.

“I was told the man who looks like a madman came from inside a government school, Rumfa school. Somebody was telling him to leave.

“They said the welder who was among the victims who lost their lives told the madman to go away when the incident happened. The welder don’t use gas because his daughter just came and park his engine and no any gas. He uses electricity. And the man selling chemical, we have been here for a long time no single bottle has never explode that we could say the chemical is the cause,” Balogun said.

He continued when he listed about two persons and more who he confirmed dead.

“A woman who supply ice block and owner of that condemned car lost her life. The daughter of the woman who operates the hair dressing shop and also sells drink is also dead”.

Another survivor, Lukman Yusuf, who operates an electronics shop and whose shop was across the road said he saw part of human being fly from the scene of the incident to where his shop was located.

“I got to my shop some minutes past 8am in the morning. The incident happened some minutes to 9am. I operate electronic shop. I was just bringing my things out and was about powering my generator set when I had a loud sound. The next thing I saw was part of human being fly to near my shop. Initially, I didn’t pay attention to what flew pass me. It was later I saw that it was somebody’s leg. So we rushed to the scene, I saw people dead and others injured. Many school children in building opposite where the incident happened were injured. Some of them have been discharged while others were still hospitalized.

“There are some adults who were also hospitalized and others dead. Among those dead is one young girl, Mary who just graduated from Secondary school. Her mother is a hair dresser who is currently hospitalized. Aside hair dressing, they also sell drink in the shop. So the elder sister to the hair dresser who supply ice block also died. We have buried Mary yesterday (Tuesday). We are making arrangements to bury the ice block seller and another lady whose identity I don’t know this evening at the Ahmadiyya burial ground located at brigade by airport road,” Yusuf said.

Another survivor and food vendor, Mistura Abdullateef who spoke to Vanguard from her hospital bed said she was still having issues with her hearing impairment, back and leg pain.

“I want to preparing food when the incident happened. I heard a loud sound and the fence from the collapsed building fell on my leg. Because my shop is beside the building. So I managed to drag myself out.

“The occupant of the upstair, came to me to collect onions to prepare indomie. She do decoration. She was on her way back to the upstairs when my phone rang and I went to receive the call before the explosion went off. So I managed to drag myself out. The next thing was I found myself in the hospital. I don’t even know how I got to the hospital. But my elder sister later followed them here.

“I still feel some sound in my hearing impairment. And feel pain in my back and the injury on my leg. They told me they will do x-ray. But I was told that my case was minor.

“I have opened my shop and we were there with my worker before the incident happened. But no scratch on her body as she was unhurt.

“Nobody is selling chemical there. The next shop to mine was shop of generator and those selling minerals.

The NEMA Kano Territorial Coordinator, Dr. Nuradeen Abdullahi, made the confirmation while briefing newsmen on the update of gas explosion in Kano on Tuesday.

“The death toll in the gas explosion which occurred at Aba Road in Sabon Gari of Fagge Local Government Area Kano has increased to nine.

“9 dead bodies were recovered from a collapsed building affected by the explosion and have been deposited at the mortuary at Armed Forces Specialist Hospital Kano.

“10 persons injured and were taking to various hospitals which include Alpha hospital, Green land hospital and Cactus hospital out of which two have been discharged.”

He noted that the Director General NEMA, Mr. Mustapha Ahmed-Habib, was at the scene of the incident.

“The Director General NEMA led the rescue team and escavators were mobilized to ensure removal of trapped victims.

“NEMA rescue team were at the site of the incident to investigate and ascertain the impact of the explosion.

Abdullahi noted that the rescue operation which started from 10:00 a.m and officially closed at about 5:15 p.m was well coordinated.

He called on the general public particularly those living in the area where the incident happened to remain calm and warned against spreading of fake news.

Kano explosion: There was explosion of chemicals while evacuation was ongoing — Red Cross

Similarly, the Nigerian Red Cross Society said that while the search and rescue operations were carried out chemicals stored in the building started exploding.

The State Branch Executive Secretary, Alhaji Musa D. Abdullahi disclosed this in an exclusive phone interview with Vanguard said, “as they say that there was explosion. And then there was a store where they keep chemicals and then there was also a welder doing his welding with his gas. So only God knows what happened, if it was the chemicals because even when the evacuation (search and rescue) was ongoing the chemicals started exploding.

“But my recommendation is that the Federal and State Fire Service should go there and inspect the place where they kept the chemicals and ensure they are properly kept.

“It is not proper to keep chemicals in a place where people are residing. You can see that within one minute the number of people that died. It is high time, people should not be allowed to keep such chemicals in residents,” Abdullahi said.

He continued when he said no children was among nine corpses evacuated from the scene of explosion noting that all victims were adults.

He stated that while it was able to identify six, three others could not be identified.

He said the victims were deposited at the Armed Forces hospital with names penciled down.

According to him, “There are nine persons confirmed dead. And six were recognized while three others were beyond recognition. And all the bodies were deposited at the Armed Forces medical hospital here in Kano. They have all the names there.

“Actually, we did not evacuate any injured person. What I learnt was that some neighbours who arrived the scene before us rescued one or two to the nearest private hospitals.

“No children in the corpses. All are adults. I can’t give the breakdown of how many male and female because we were working to rescue and save lives and ensure nobody is trapped in the collapsed building. We were there when the Vice President visited the scene. We just returned not quite long ago,” Abdullahi said.

According to him, “I was in the area (Sabon Gari) early in the morning but went back home to take my bath when I received a call notifying me about the sad incident. They say the incident happened some minutes past 8am in the morning.”