The suspects were arrested after which items including trucks, buses, cash and cars, and other machines were retrieved from them. 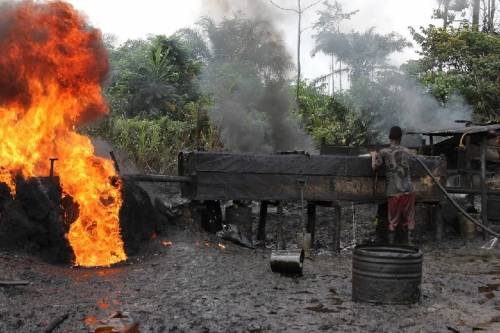 According to a report by SaharaReporters, some operatives of the Nigeria Security And Civil Defence Corps in Lagos State have arrested 19 persons suspected to be oil vandals in the Ikeja area of the state.

The CG Special Intelligence Squad, on Monday stormed Etal Avenue at Oregun, Ikeja, where it burst an illegal oil storage site, where Automotive Gas Oil (AGO) was being refined.

The suspects were arrested after which items including trucks, buses, cash and cars, and other machines were retrieved from them.

A statement from the spokesperson, Abolurin Olumide, obtained by SaharaReporters on Tuesday, explained that the operatives acted on credible intelligence, and in line with the NSCDC Commandant General (CG), Ahmed Abubakar Audi who ordered that oil thieves in the Oregun area of Lagos be weeded out.

”The CG Special Intelligence Squad, upon  bursting the illegal oil site, where it was discovered that petroleum products were being illegally stored and refined, as well discovered and arrested the following persons and items:

(vi) One hundred and forty (140) drums containing illegally refined (AGO)

“The squad was immediately re-enforced by the Anti-vandal team of the Lagos State Command, on the swift orders of the Commandant, NSCDC, Lagos State Command, Commandant Eweka Edenabu Douglas who clinically directed that the arrested suspects be brought for adequate interrogation and investigation, in the Intelligence and Investigation (INT) Department, at the State Command Headquarters in Alausa, Ikeja, before further legal action will be taken on the matter.”

It added that the anti-vandal unit of the command had been directed to take full charge of the illegal oil site and forestall any further untoward activity by the economic saboteurs.

The Commandant also said that he warned oil thieves in the state to desist from the inimical act capable of sabotaging the nation's economy “with the disturbing untoward experiences it could bring upon the ordinary citizens of our nation.”