The group warned that this will confirm the alleged claim that President Muhammadu Buhari is pushing for the full Islamization of Nigeria. 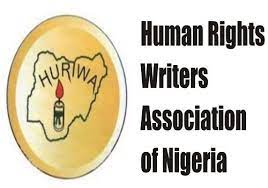 Daily Post reports that the Human Rights Writers Association of Nigeria, HURIWA, has again warned political parties in the country against positioning or presenting a Muslim-Muslim ticket for their presidential candidates in the coming 2023 election.

The group warned that this will confirm the alleged claim that President Muhammadu Buhari is pushing for the full Islamization of Nigeria.

HURIWA claimed that the plot is to continue to have the Muslims dominate all strategic and key political positions in Nigeria such as the President, Vice President, Chief Justice of Nigeria, Senate President and Speaker of the House of Representatives and to repeat President Buhari’s appointment of only Muslims to head the key security agencies.

“We are uniquely worried by the organised and well-choreographed, well oiled, well funded and properly engineered campaigns by Islamic fundamentalists such as Governor Nassir El-Rufai and others using some Christians like Orji Kalu, Femi Fani-Kayode to canvass the infantile opinion that either it does not matter that candidates for the office of President, Vice President or Governor and Deputy Governor should comply with the simple constitutional demand of the federal character principles in appointments and elective positions.

Kalu had on Wednesday argued that Tinubu can use a Muslim running mate because his wife is a Christian clergy, and HURIWA described this assertion as puerile, irrational and totally illogical and warped thinking, adding that it is like presuming that the office of President is like the office of General Overseer of a pentecostal Church

HURIWA said it agreed with the time-honoured and time-tested explanation offered by an academic expert, Jude Chukwuma Onyeakazi that the issue of national integration and the peaceful coexistence of the pluralistic and multi-cultural Nigerians in Nigeria has been a national discourse in the country since it secured independence in 1960.

The rights group said the “poisonous chalice of the Muslim-Muslim ticket by the APC is capable of inflaming religious passions, hatred, and sectarian division if carried through.

HURIWA said “it is aware that the plot is to foist an Islamic state because what will happen is that Bola Ahmed Tinubu who is a hard-core Muslim extremist but masquerading as a moderate because his wife is a so-called deacon in Redeemed Christian Church of God.