The report stated that the money was found by Independent Corrupt Practices and Other Related Offences Commission (ICPC). 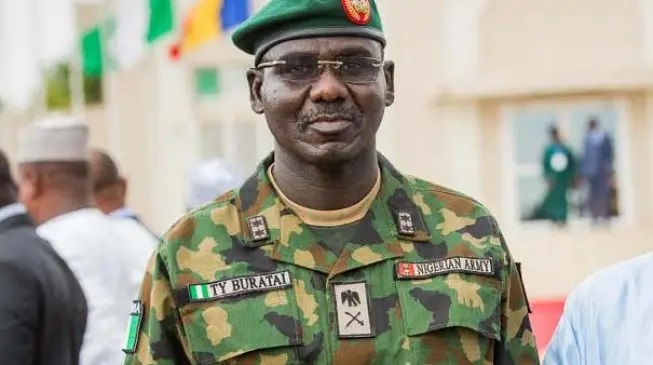 According to Sahara Reporters, a staggering N1.85 billion has been found in the house and office of a former Chief of Army Staff, Tukur Buratai in Abuja.
The report stated that the money was discovered by the Independent Corrupt Practices and Other Related Offences Commission (ICPC).
According to the report, ICPC officials stormed the house in the Wuse area, beside the National Open University of Nigeria Campus in Abuja last week after it received a tip-off from a whistleblower.
SaharaReporters gathered that the huge cash was part of the billions of naira earmarked for the purchase of arms and ammunition by the Muhammadu Buhari-led government.
“Last week Thursday, ICPC officials stormed a house in Wuse area of Abuja, beside National Open University and arrested a man, Kabiru Salisu after they saw N850 million cash in the house,” a source told SaharaReporters.
“He claimed the money belonged to Tukur Buratai who was in Cotonou at that time.
“Officials of the ICPC took him to an office where another N1billion in cash was also discovered. Also, bulletproof cars, BMW, G-Wagon worth N450m were recovered."
“Serious pressure is being mounted to claim money found was only N30m,” another source said.
In March 2021, Nigeria’s National Security Adviser (NSA), Babagana Monguno revealed that funds running into billions of naira meant for the procurement of arms and ammunition under the past service chiefs were unaccounted for. His revelation came a few months after President Buhari replaced Buratai and other service chiefs. Others were former Chief of Defence Staff, Gabriel Olonishakin; Chief of Air Staff, Abubakar Sadique and Chief of Naval Staff, Ibok Ibas.
According to Monguno, neither the money nor the arms were on the ground upon the resumption of the new service chiefs. “Now that he (President Buhari) has brought new people (service chiefs), hopefully, they will devise some ways… I’m not saying the former service chiefs diverted the money, but the money is missing. We don’t know how, and nobody knows for now,” he had said. “The President will surely probe this matter. As we speak, the Nigerian Governors’ Forum too is also wondering where all the money went. I can assure you the President takes issues of this nature seriously. “The fact is that preliminary investigation showed the funds are missing and the equipment is nowhere to be found. “When the new service chiefs assumed office, they also said they did see anything on the ground.”
History Of Graft
Sahara Reporters had in a series of publications in 2016 exposed how Buratai procured expensive assets in Dubai, the United Arab Emirates, between 2013 and 2015, from proceeds of crime. He and his two wives in 2013 paid the sum of 1,498,534.00 AED (N120 million/$419,000) for the first property, Project TFG Marina Hotel Unit 2711. Sale documents indicated that the first property was handed over to the Buratais on January 13, 2013.
Eleven days after he was appointed by President Buhari, the retired Army General made arrangements for the purchase of a second property from the same company in Dubai. Between July 24 and August 17, 2015, he paid a total sum of N42.2 million into TFG Sigma 111’s account in Nigeria (Skye Bank 1770380452). Evidence exclusively obtained by SaharaReporters revealed that Buratai made N10 million payments on July 24 and August 7 respectively.
Three days later, another N10 million was paid into the real estate firm’s account. The phone number on the Skye Bank teller is 08033349740. Saharareporters investigations showed that it belonged to a Nigerian Army Major, Emmanuel G. Adegbola of the Nigerian Army Finance Corps (N/10808). On August 17, 2015, the Chief of Army Staff paid the sum of N3,270,000 into the account.
Buratai, who owned up to purchasing the two properties in Dubai, however, claimed that he amassed his wealth through “personal savings” and not ill-gotten gains. He added he made a lot of money from his snake farm along Keffi-Abuja Highway in Nasarawa, just 50 kilometres from the nation’s capital.
Top Stories