Chinedu Ihekwoaba revealed that he once had a chat with a lady and told her she prefers to take 100% of the bills in marriage. 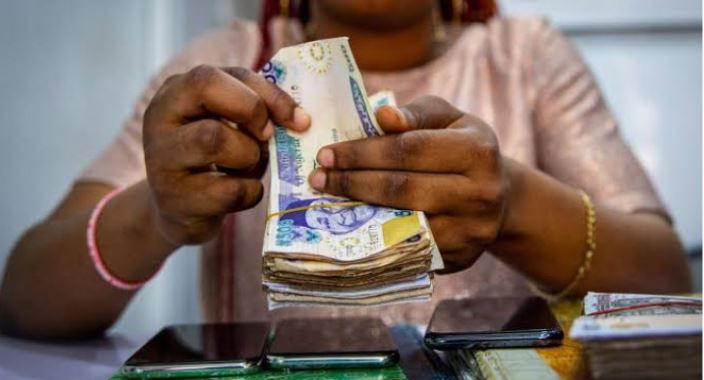 A Nigerian writer has claimed that any man who splits bills with his woman is useless.
Chinedu Ihekwoaba took to Twitter to make the claim.
According to him, he once had a chat with a lady and told her she prefers to take 100% of the bills in marriage because he does not believe in splitting it.
Chinedu added tht as long as he gets fresh food daily and the children are fine, he is okay with that and urged fans to stop demanding this from women and form alpha males.
He wrote: "I once had a chat with a lady & told her I prefer to take 100% of the bills in marriage. I don't believe in splitting it. Of course, she can support. It's her choice. But not mandated. As long as I get fresh food daily & kids are fine. Only a useless man split bills. Be a man!
Our parents never split bills. They were man enough. Stop demanding this from women and forming alpha male. You are just not man enough. Stick to yourself. It's okay if she offers to help." 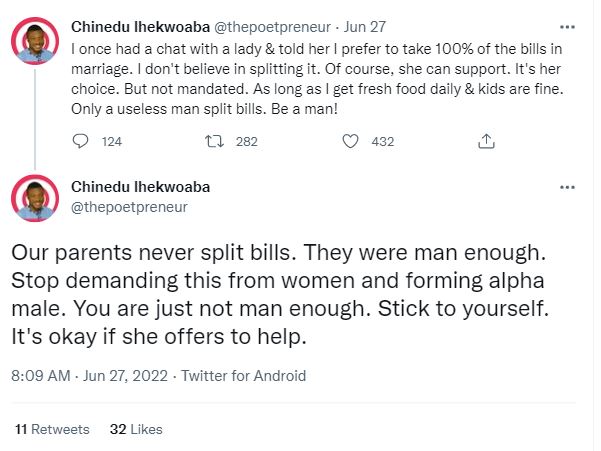 Reacting to this, Gideon on Instagram wrote; ‘The world doesn’t revolve around you and will never. Stop insulting people for not seeing things from your own perspective. It’s not a big deal to split bills tho, there’s no law that says a man should pay the bills always.
superwoman9ja wrote; ‘Hmmm this kind of makes sense. It doesn’t mean a woman cannot support. A reasonable woman will. Imagine some men demanding splitting bills and still wanting her to do all the house chores. Why not get ya self a slave?
dbnaturals wrote; ‘Wahalurr… Please o this thing is subjective don’t impose your choices on everyone. I know for sure that I’m not going to be home cooking fresh meals for no one 😂🤣😂🤣…
kamise wrote; ‘Baba na that fresh food daily you for fuck up…when person no be iya rashida foods and canteen 🏃‍♀️ 🏃‍♀️ 🏃‍♀️’
itzramaalay wrote; ‘Chinedu you are wrong !!! This mentality of yours is warped and needs to be checked !!!!! A man is the head of the family and provides for his home 💯💯💯 a woman which God said should be a support and a guide to a man is certainly there for a reason.
No man would put his woman that he truly loves under duress to drop something on the table. A man is alwys moved to hear his woman say baby what can I contribute and watch him say “my love you don’t have to” that only makes a man to do more for his woman. Support whenever you feel you should and don’t stress another woman’s son biko’
Top Stories