The accused who is living in India on a forged passport and visa was arrested on Saturday, July 2. 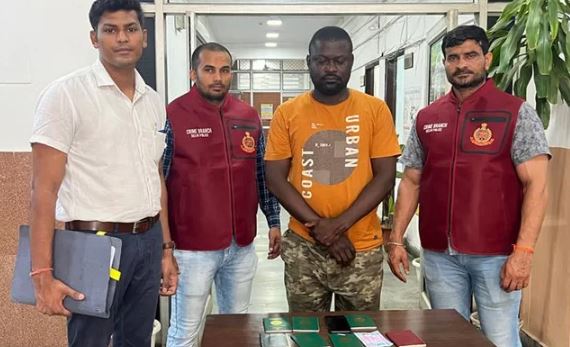 A 42-year-old Nigerian national allegedly involved in supplying fake passports and visas to foreign nationals for illegal activities has been apprehended by the Delhi Police.

The accused identified as Onwumelu Luke Chike who is living in India on a forged passport and visa was arrested on Saturday, July 2.

According to DCP Crime Rohit Meena, on May 29, 2022, a complainant Dharamvir Singh lodged a complaint at the PS Crime branch regarding cheating by an African National namely Famakan Keito for Rs 1 Lakh on the pretext of doubling the money with a Miracle Chemical.

"On sustained interrogation, the accused disclosed that one person namely Naja Stam arranged him fake passport ID in the name of Ivance Donald Kamto,” he said.

"During the investigation, the team gathered all technical clues and the team nabbed the accused Onwumelu Luke Chike alias Naja Stam from Malviya Nagar"

"The accused Omwumelu came to India in the year 2010 on a business visa from Nigeria. He started buying clothes etc from Delhi and sent it to Nigeria to be sold to earn his livelihood. His visa got expired but he did not get it extended. He stayed on an expired visa in India. He got married to a resident of the Republic of Tanzania and has two daughters," the police said.

"During this period, one of the Nigerian friend namely Paul contacted him from Nigeria and introduced him to one Nigeria National Tijan.

Tijan contacted him through a WhatsApp number and asked him to work with him. Tijan lured him that he can earn money by providing fake passports and visas to people living in India from other countries

"Tijan used to send the fake passports and visas through courier to him and the accused further delivered it to people. The accused also started to receive commission money through Western Union and Ria Money Transfer Service Pvt Ltd by providing a fake Passport ID in Noida (UP) and Delhi

"To earn quick money accused started providing fake passport and visa to those people who either staying as illegal migrants on expired visas and passports or lost their passports. He started contacting such persons who required fake passports and visas. Accused has delivered more than 100 Fake Passports and visas till date,” police added.