His wife rode in a car trailing behind the truck Whalen and their kids were riding in and she managed to capture the lightning strike. 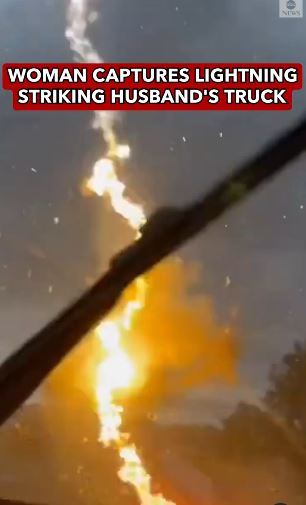 The scary moment a man's truck was struck by lightening has been captured by his wife.

Her husband, Edward Whalen and his family were in the truck while driving down I-75 on Friday evening, July 1.

The family was leaving St. Petersburg and heading back to their hotel when the unthinkable happened.

His wife, Michelle rode in a car trailing behind the truck Whalen and their kids were riding in and she managed to capture the lightning strike.

According to Whalen, "She (Michaelle) thought the storm was really neat looking and so she wanted to get a picture of it and she kept trying to snap pictures, she couldn’t catch it. So my son-in-law recommended she use that slow motion video."

That’s when she caught the big moment.

"You could feel a slight buzz in the car when it hit us, and then my oldest daughter was sitting next to me and she jumped halfway in my lap and screamed," Whalen said.

"She [Whalen’s daughter] yelled daddy what happened and I said we got hit by lightning," Edward Whalen added.

No one in vehicle was uninjured, according to the family, however, the truck was "completely fried" by the lightning strike.

Whalen said: "I had to jump out of the truck and run back to her and hold her and let her know we were all fine. We were really confused. We had real bad headaches.

"That was always my dream truck, and I finally got it. I had just made my third payment on it and then boom. Hopefully, it’ll work out though."

"It was pretty wild. After everything was done, my son said we needed to check ourselves in a couple days for super powers."