Blasphemy: Drama As Counsel For Kano-based Islamic Cleric, Abduljabbar Walks Out On Judge During Court Proceeding


Abduljabbar Nasuru Kabara Abduljabbar is an Islamic cleric and a Qadiriyya scholar based in Kano, Nigeria. 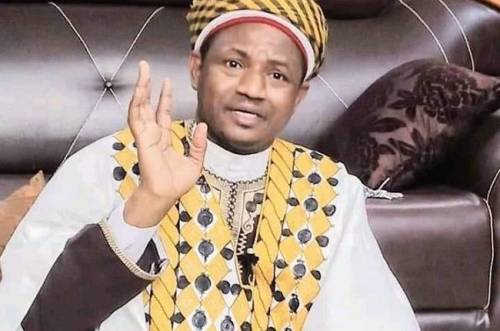 There was mild drama in court recently in Kano during the trial of Kano-based cleric, Sheikh Abduljabbar Kabara.

Drama ensured after a lawyer, Dalhatu Shehu-Usman who is Sheikh Abduljabbar Kabara, who is standing trial over alleged blasphemy reportedly walked out on the trial judge on Thursday.

Abduljabbar Nasuru Kabara Abduljabbar is an Islamic cleric and a Qadiriyya scholar based in Kano, Nigeria.

He is standing trial for alleged blasphemy, incitement, and sundry offences he was said to have committed during his sermons.

Daily Trust reports that the defence counsel on June 23, prayed the court to discharge his client on the grounds that the entire charge slammed against him was not based on law.

At the resumed trial on Thursday, Shehu-Usman prayed the court to allow the defendant to move a no-case submission, saying no prima facie case was established against his client.

But the defence counsel opposed the cross-examination made by the prosecution team and threatened to walk out of the court.

“Why will the prosecution be asking the defendant when his father died? It is not contained in the charge,” he said.

The judge had permitted the prosecution to go ahead with cross-examination and the defence counsel picked up his belongings and walked out of the court.

Shehu-Usman also requested a copy of the proceedings, adding that he will challenge the ruling before an upper court.

Subsequently, the court adjourned the case to July 21, 2022, for the continuation of defence.

This followed his refusal to respond to all the new charges filed against him by the state government.

Sheikh Abduljabbar had suddenly gone quiet after the court approved the inclusion of fresh charges filed by the Kano State government, which his lawyers had objected to.

The presiding judge, Sarki Yola, had overruled their objections and ordered Abduljabbar to respond to the new charges, but his lawyers asked him to keep mute, and he obliged.

Yola subsequently gave the order after the prosecution counsel, Surajo Sa'ida made the request.

According to reports, Abduljabbar was facing a serious health condition in detention.

SaharaReporters earlier reported that the embattled Sheikh's lawyer, Rabiu Abdullahi previously disclosed that his client's grave health condition had been confirmed by a medical consultant from a government hospital in the state.

Abduljabbar Kabara was said to have undergone some tests before the ailment could be determined.

However, Abdullahi later said his client was put on some medications by health personnel to manage the situation.

"Medical personnel has confirmed that he is not healthy. He asked if he was having health issues before he was arrested and he said no. If he was diagnosed with a stomach ulcer and he said nothing was wrong with him before his detention. He was also asked if he had ever had this type of bleeding before and he said he never experienced it in his life.

"The doctor then advised him on what to do and prescribed some drugs. This is pending the outcome of some tests that will confirm his exact condition,” he had stated.

The state Commissioner for Information, Malam Muhammed Garba had said in a statement that Abduljabbar was sued following the receipt of the first information report from the police by the Office of the Attorney General and Commissioner for Justice, which prepared charges against the cleric.

“Abduljabbar was subsequently arraigned on Friday, July 16 before an Upper Sharia Court Judge, Kofar Kudu, Alkali Ibrahim Sarki Yola, where the charges included blasphemy, incitement, and sundry offences were mentioned,” it had noted.