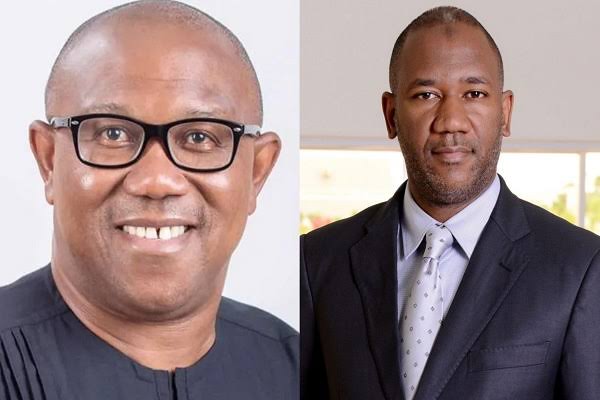 Nigerians have hailed Peter Obi and his running mate, senator Datti Baba Ahmed after a video of the duo laughing heartily surfaced online.
Recall that Obi had on Friday announced Senator Datti Baba Ahmed, a former presidential aspirant, as his running mate.
Senator Yusuf Datti Baba-Ahmed, the founder of Baze University, Abuja, was announced as the LP vice-presidential candidate at the Labour Party’s national head quarters in Abuja.
Baba-Ahmed , who is 48 year-old, served as a Representative for Zaria Federal Constituency from 2003 to 2007.
In the video, Baba-Ahmed was pictured together with Peter Obi, laughing heartily.
Nigerians have expressed joy over the Labour Party’s choice of running mate.
Watch video below:

VP candidate ⁦@dattibabaahmed⁩ to ⁦@PeterObi⁩: “There is a crown on your head already.”

Some of the reactions below;
@dattibabaahmed wrote; ”I love the chemistry between them already..”
@Charles wrote; ‘Two intelligent gentlemen with some sense of humour. May the Almighty perfect your plans’
@The PetObi Volunter Structure wrote; ‘‘Damn right! The team that represent hope for the Nigerian youths!”
@incredibl3human wrote; ‘Two faces of The New Nigeria! Two Supermen of integrity!’
@The_formsworth wrote; ‘‘Omo I have been smiling like a goat since I saw the video, these guys got me believing again”
@dattibabaahmed wrote; ”The English sef is too sweet”
Top Stories