Kalu was also accused on Twitter of allowing his alleged mistress to address journalists at the National Assembly, which some of his critics described as unethical and wrong. 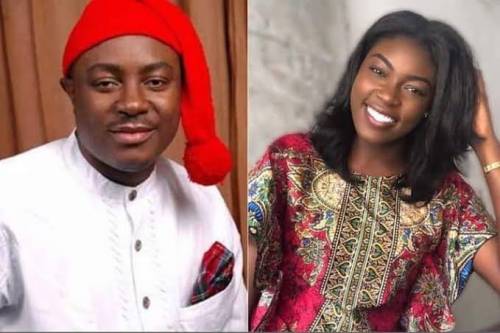 Hon. Robinson Uwak, a former member of the House of Representatives, has made startling accusations against Benjamin Kalu.

Uwak accused the House of Representatives spokesperson, Benjamin Kalu of having illicit affair with his estranged wife, Kezia and being responsible for his broken marriage.

Uwak, who made the accusation on his Twitter page, @_lager, screenshots of which have gone viral, alleged that his wife dated Kalu since he married her.

According to Uwak, Kalu has refused to allow his (Robinson) family to run smoothly.

Kalu was also accused on Twitter of allowing his alleged mistress to address journalists at the National Assembly, which some of his critics described as unethical and wrong.

He also alleged that “despite being a married woman, Kalu continued his illicit affair with her, booking and inviting her to hotels to sleep with her”.

He added, “When I confronted my wife about it, she cried and pleaded profusely at a family meeting and I forgave her.

“Despite her pleas, she continued with her cheating, which led to the last altercation with me.”

Uwak, who represented Oron, Mbo, Okobo,Ure-Offong/Oruko and Udung-Uko federal constituency of Akwa Ibom State at the 7th Assembly further accused Kalu of asking the Department of State Services (DSS) to arrest him and secretly sponsoring petitions against him over ‘trumped-up domestic violence allegations by his wife’.

According to Uwak, Kalu has vowed to send him to jail “so that he will feel free to have my wife as he pleases”.

Meanwhile, SaharaReporters called Kalu several times and sent a text message seeking his response to the allegations but he had neither answered the calls nor replied to the text message at the time of filing this report.

However, Daily News quoted the House of Representatives spokesperson, Kalu as describing the allegations as frivolous.

Kalu said he would not be distracted by them.

Kalu, who is representing Bende Federal Constituency of Abia state in the House of Representatives said, “There are many people who are waiting to cast aspersions on the integrity of the man called Benjamin Okezie Kalu and if I am not aware of that, I am living in the fool’s paradise.

“This is the time I should use to speak to my good people of Bende and not to glorify irrelevant issues without facts to it.

“All these things happening is all about Bende, we have brought the dividends of democracy and it is driving some people crazy, getting them worried and they are having sleepless nights but the truth be told, our eyes are on the ball, we are not blinking and anybody who has any dirt should bring it on. We are here to bring more dividends of democracy.

“I will keep working till the election and I am returning to make sure we continue from where we stopped because we have lived in the dark for too long. No amount of threats, smear campaign or defamation, or gang ups, casting aspersion on my integrity that has been upright for the last 5 decades can stop me. I was prepared for this and all that will come with it.”