Aleru said this in an interview published by DW Hausa on Sunday, July 24. 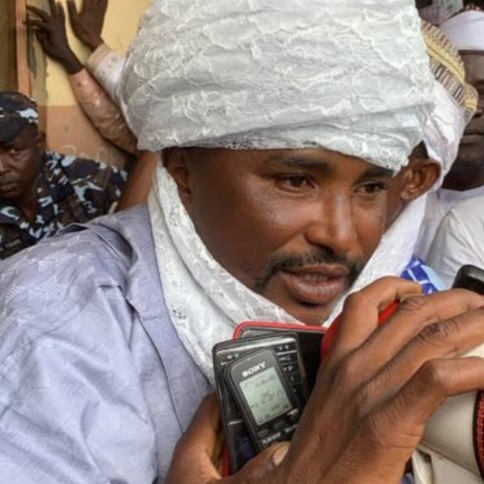 Terrorist and kidnap kingpin, Ado Aleru has revealed that he never begged to be turbaned as Sarkin Fulani in Zamfara.
He made this public in an interview published by DW Hausa on Sunday, July 24.
Aleru was turbaned as the Sarkin Fulani on July 16 by Aliyu Marafa, Emir of Yandoto, in Tsafe LGA of the state.
The turbaning ceremony took place after the police placed Aleru on its wanted list over his alleged involvement in banditry.
Aleru's coronation generated public outcry and the state government subsequently suspended Marafa, who conferred the title on Aleru, who is wanted in neighbouring Katsina State for mass killings.
Matawalle also banned traditional rulers in the state from awarding chieftaincy titles without getting government approval.
Speaking on the reactions to his receiving the title, Aleru said it was the emirate that came to him.
He said: "This title, let me tell you the truth, I didn’t ask for it; they reached out to me regarding it.
"They called and informed me of what they wanted to give me. Then, I said ‘no, this shouldn’t happen’. But since I have parents, later we sat down and discussed about it, and since the new king has said what he wants to do in his kingdom, I accepted the title."
The Katsina government had placed a bounty of N5 million on information leading to the arrest of Mr Aleru, who is accused of killing 52 people in Kadisau, a community in Faskari Local Government in 2019.
Speaking following his coronation, Aleru also denied taking part in the Kadisau village attack linked to him.
He said: "The talks about Kadisau, please, I beg you in the name of God to ask the Emir of Kadisau or look for his number and ask him the cause of the attack."
Aleru also said in an interview with the BBC that while his men kidnap people, he is only interested in killing people.
In a documentary titled "The Bandit Warlords of Zamfara" billed to be aired on July 25, 2022,  Aleru said: "My men do that; I just go and kill them (people)."
Top Stories