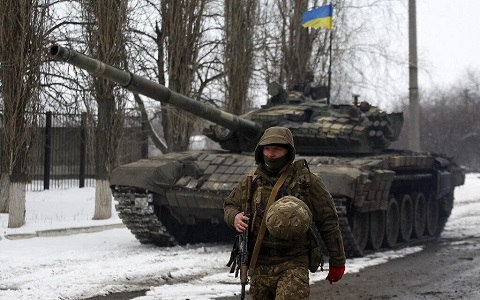 Rockets fired by Russia into Ukraine has killed at least 22 persons.
The attack also left dozens wounded on a Ukrainian train station on Wednesday, August 24, Ukranian President Volodymyr Zelenskiy said.
The incident happened as Ukraine marked the anniversary of its independence from the Soviet Union.
Zelenskiy had warned of Russian attacks on Independence Day, which is also six months since Russian forces invaded Ukraine, Europe's most devastating conflict since World War Two.
In a video addressed to the United Nations Security Council on Wednesday, Zelenskiy said the rockets hit a train in the small town of Chaplyne, some 145 km (90 miles) west of Russian-occupied Donetsk in eastern Ukraine. Four carriages were on fire, he said.
In a message posted on the messaging app Telegram, Ukraine's President Volodymyr Zelensky described the attack on Chaplyne railway station in a Ukrainian-held area as today's "pain".
"As of this moment, there are 22 dead, five of them burned in a car," he said before adding one of those killed was an 11-year-old whose house had been destroyed by a Russian rocket.
He said: "Search and rescue operations at the railway station continue. We will definitely make the occupiers answer for everything they have done. And we will certainly throw out the invaders from our land."
Ukraine had canceled the Aug. 24 celebrations in public places, but many Ukrainians marked the occasion by wearing embroidered shirts laced with the national flag colours.
Air raid sirens blared at least seven times in the capital Kyiv during the day though no attacks occured in Kyiv according to reporting from Reuters.
Zelenskiy and his wife, Olena Zelenska, joined religious leaders for a service in Kyiv's 11th-century St. Sophia cathedral and laid flowers at a memorial to fallen soldiers.
The 44-year-old leader also promised that Ukraine would recapture Russian-occupied areas of eastern Ukraine and the Crimean peninsula, which Russia annexed in 2014.
"We will not sit down at the negotiating table out of fear, with a gun pointed at our heads. For us, the most terrible iron is not missiles, aircraft and tanks, but shackles," he said.
Top Stories