Tears Flow As INEC Staff, Nwokorie Anthony Who Was Killed By Gunmen Is Buried In Imo


Anthony, who was in participating in the registration of voters was shot dead by gunmen at Nkwo Ihitte (PU 004) in Amakohia Ward (RA 02) of Ihitte Uboma Local Government Area. 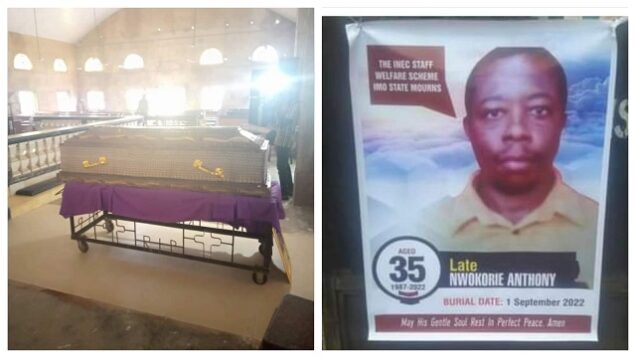 A staff of Independent National Electoral Commission, INEC, Nwokorie Anthony, who was killed some time ago, has been buried.

The man who was shot dead during the just concluded Continuous Voter Registration, CVR in Imo State last April was buried on Thursday in his community in Imo State.

Anthony, who was in participating in the registration of voters was shot dead by gunmen at Nkwo Ihitte (PU 004) in Amakohia Ward (RA 02) of Ihitte Uboma Local Government Area.

According a statement by the National Commissioner and Chairman Information and Voter Education committee, Barrister Festus Okoye, the suspension of the CVR sequel to the death of the Commission’s staff.

“This is sequel to a report by the Resident Electoral Commissioner (REC), Professor Emeka Ezeonu, to the effect that today, 14th of April 2022, Mr. Nwokorie Anthony, a staff of the Imo State office of the Commission involved in the ongoing CVR exercise, was shot dead by unknown gunmen at Nkwo Ihitte (PU 004) in Amakohia Ward (RA 02) of Ihitte Uboma Local Government Area.

“The REC further reported that the state office is making efforts to locate the whereabouts of the two remaining staff involved in the registration exercise.

“Prior to this incident, the commission had suspended the CVR in Orsu and Njaba local government areas of the state on account of insecurity while the exercise is taking place only at the INEC LGA office in Oru East, Oru West, Orlu and Ohaji – Egbema Local Government Areas of the State.

“The commission extends its condolences to the family of Nwokorie Anthony and prays that God will grant them the fortitude to bear the loss. The incident has been reported to security agencies to unravel the circumstances that led to this unfortunate incident and bring the culprits to justice.

“We enjoin the President General of the various town unions in Imo state as well as all the critical stakeholders to protect staff of the commission engaged in national assignment.

“The safety and security of staff is of paramount importance to the commission, particularly, with the devolution of the voter registration exercise beyond our state and local government area offices nation in our determination to serve Nigerians better.”