The pastor said men having long hair long enough to brush off their face or tie into a roll opposes their gender and the Bible. 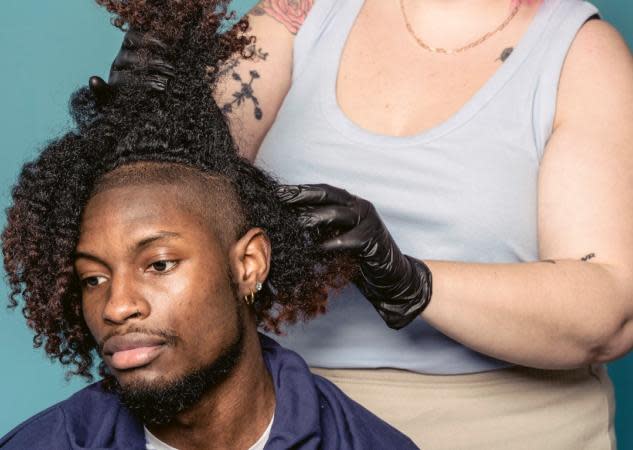 File photo
A man of God has condemned men growing long hair.
Pastor Jewel Lee, the Presiding Pastor of The light Church of Clayton, North Carolina, the United States said it is a worldly act.
According to Lee, in a TikTok video on Tuesday, he said men having long hair long enough to brush off their face or tie into a roll opposes their gender and the Bible.
“How you a man and you tying your hair up in a bun,” Lee said in the viral clip. “Men don’t walk around with buns on their head!”
Blavity News reported he went further that the Bible says having long hair is “a shame for a man,” and when the crowd reacted with a mixed response, he noted they were part of the “problem.”
“That’s the problem, we’re so easily offended,” said the pastor.
Lee continued on his discourse, waving brushing hair away from his face and tossing his hair back and forth with scorn.
In the clip, the pastor mumble “you’re a devil” as he chided the behaviour of men with long hair.
“That ain’t God, that’s worldliness. Men don’t do stuff like that,” Lee said.
Meanwhile, viewers reacting on social media were not pleased with the pastor’s sermon as many questioned the increasing number of Black churches.
“I feel like there are more important things to preach about,” one user said.
“Lord this your servant,” another added with a face palm emoji.
“Yep. This is what happens when people take verses of the Bible and remove the context,” one viewer noted.
Others mentioned that Jesus himself had long hair.
“So according to him, Jesus wasn’t a man? Every conceivable image of Jesus, he has ridiculously long hair,” a viewer tweeted.
“Black Jesus ain’t never wanna pull his hair up from ‘round his face tho…?” Another user wrote.
“This message is beyond ludicrous,” one viewer wrote.  “It sounds like he has an identity problem with himself. Samson had long hair and was told by God not to cut and if he did he would lose his power. He has no right to call someone a devil for having long hair. Some of these preachers smh.”
Top Stories