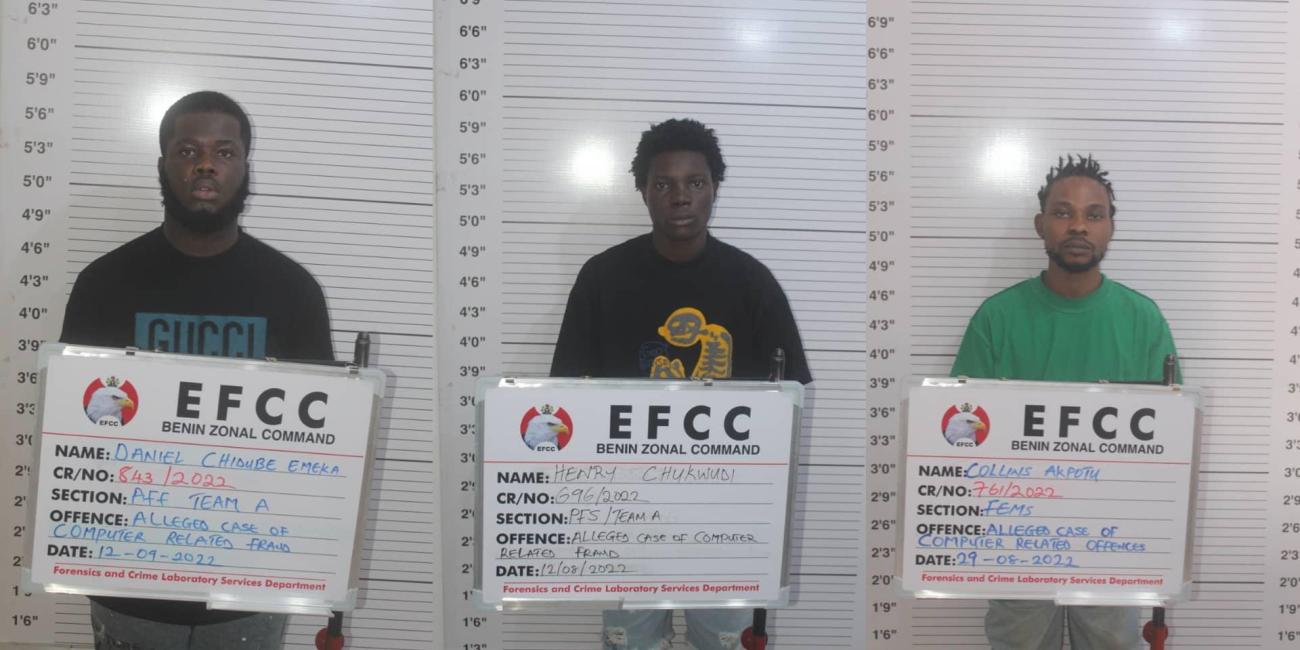 They were sentenced to seven years imprisonment over impersonation and obtaining by false pretenses.

It was learnt that their conviction was based on their arraignment by the Benin Zonal Command of the Economic and Financial Crimes Commission, EFCC, separately on one count of impersonation and obtaining by false pretences.

The charge against Emeka reads: “That you Daniel Chidube Emeka (M) sometime between 2021 and 9th September 2022 in Benin City, Edo State within the jurisdiction of this honourable court did with intent to defraud represent yourself to be Javon Blue, a verified and legitimate Bitcoin trader and thereby committed an offence contrary to and punishable under Section 484 of the Criminal Code Law Cap 48 Laws of Bendel State of Nigeria (as applicable in Edo State) 1976.”

The defendants pleaded guilty to the charge when they were read to them individually.

Based on their pleas of guilt, prosecution counsel, Ibrahim Mohammed and I. K. Agwai prayed the court to convict and sentence them accordingly.

The judge ordered the forfeiture of a Mercedes-Benz GLK350 recovered from Emeka and the sum of N1,932,893.73 (One Million, Nine Hundred and Thirty-Two Thousand, Eight Hundred and Ninety-Three Naira, Seventy-Three kobo) in his Fidelity Bank account.

"Also, to be forfeited are the defendant's phones and balances in other bank accounts, such as, Sterling Bank, Keystone Bank, First Bank and Wema Bank as proceeds of crime. All the accounts are to be permanently closed. In addition, all the defendants are to undertake in writing to be of good behaviour henceforth."

One of the convicts, Emeka represented himself as Javon Blue, a verified and legitimate Bitcoin trader in order to defraud unsuspecting victims.