A statement released by EFCC spokesperson, Wilson Uwujaren, says Chinaza was convicted after pleading guilty to a one count charge bordering on impersonation. 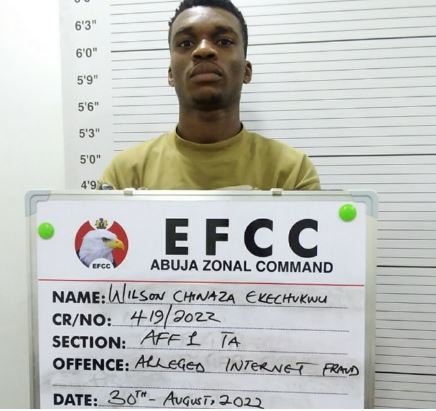 A fraudster identified as Ekechukwu Wilson Chinaza has been arraigned by the Economic and Financial Crimes Commission, EFCC, Abuja Zonal Command on October 25, 2022, before Justice F.A. Aliyu of the FCT High Court sitting in Apo, Abuja.

A statement released by EFCC spokesperson, Wilson Uwujaren, says Chinaza was convicted after pleading guilty to a one count charge bordering on impersonation.

"That you, Ekechukwu Wilson Chinaza sometime in 2022 at Abuja within the jurisdiction of this Honorable Court cheat by impersonation when you created a WhatsApp profile page using a white lady’s picture with the name Amber and under that assumed character did obtain the sum of One Hundred United States Dollars ($100) from Brian in the pretext that you are in a romantic relationship and thereby committed an offence contrary to Section 321 of the Penal Code Act, Laws of the Federation (Abuja) 1990, and punishable under Section 324 of the same Act".

Justice Aliyu, in convicting the defendant took cognizance of the plea of the defence counsel for leniency on the grounds that the defendant has a bed-ridden mum and had forfeited the proceeds of the crime to the Federal Government.

The judge sentenced the convict to a fine of N200, 000 (Two Hundred Thousand Naira Only) and community service at a location close to his place of residence.