Update: Officers In Viral Video Manhandling A Lady In A Police Station In Abuja Queried


In an update given today November 19, Adejobi said investigations showed the woman assaulted one of the officers, hence the manhandling.

CSP Olumuyiwa Adejobi, the spokesperson of the Nigeria Police Force has given an update on the police officers in a viral video manhandling a lady inside a police station in the Federal Capital Territory, Abuja.

He stated that the officials have been identified and brought to the Federal Headquarters to be queried.

Recall that a Twitter user @Icaohi shared the worrisome video showing the officers pulling the woman on the floor as they forced her into a cell. One of the officers even went as far as stepping on her.

In an update given today November 19, Adejobi said investigations showed the woman assaulted one of the officers, hence the manhandling.

He said the action of the officers was unprofessional, hence they have been queried. He said the lady in question simply identified as Gift has written an apology to the officers.

See the update he gave below 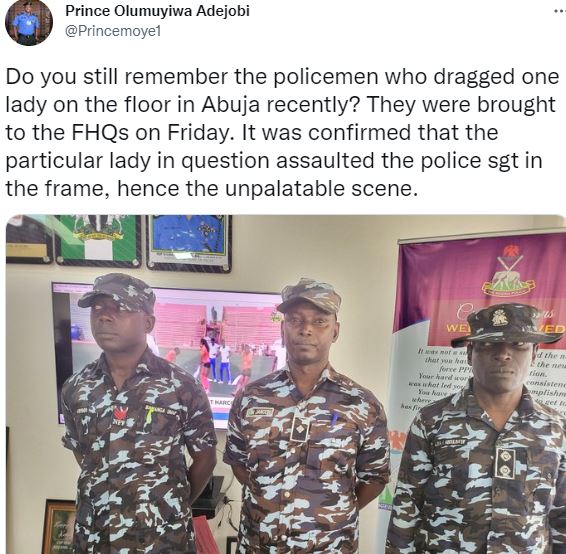 Watch a video of the officers manhandling the lady:

@PoliceNG look at what the untrained officers of the Nigerian police are doing to this lady. A reliable source informs that this incident took place at Kagini Police station Abuja.@Princemoye1@instablog9ja