The 51-year-old is the second-longest serving Premier League manager behind only Liverpool’s Jurgen Klopp and the fifth-longest serving in the top four divisions of English football. 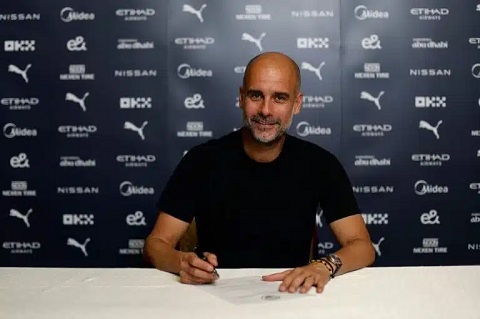 Manchester City manager, Pep Guardiola has signed a new contract with the club.
Guardiola signed a two-year contract extension that will keep him at Manchester City until 2025.
His existing deal at the Etihad Stadium expires at the end of the season.
Guardiola was in Abu Dhabi for the Formula 1 Grand Prix at the weekend and held more talks with City’s hierarchy and a deal was thrashed out quickly once he confirmed his intention to stay.
Following the announcement, Guardiola said: “I am so pleased to be staying at Manchester City for another two years.
“I can’t say thank you enough to everyone at the club for trusting me. I am happy and comfortable, and I have everything I need to do my job as best as possible.
“I know the next chapter of this club will be amazing for the next decade. It happened over the last ten years, and it will happen in the next ten years because this club is so stable.
“From day one I felt something special being here. I cannot be in a better place. I still have the feeling there is more we can achieve together and that is why I want to stay and continue fighting for trophies.
“This is just the confirmation of how comfortable we are, the club and myself, again, like signing at the beginning. I cannot say thank you enough to the club to trust me, to give me the opportunity to do my job as best as possible, but that is just papers.
“We have to be comfortable with the team, with the club, otherwise it makes no sense. The incredible, beautiful memories we had together, and still have the dream to achieve more. I know what the club wants. I will fight for that with our players and staff to do our club as best as possible.”
The 51-year-old is the second-longest serving Premier League manager behind only Liverpool’s Jurgen Klopp and the fifth-longest serving in the top four divisions of English football.
Guardiola joined Manchester City in 2016 after three years at Bayern Munich, where he won the Bundesliga on three occasions and the DFB-Pokal twice.
His serial winning has continued during his six years in England, too. City have won the Premier League four times during his tenure, as well as one FA Cup, four Carabao Cups, and two Community Shields.
Top Stories