Wike hinted that the said person whom he did not mention his name, was denied ticket by the PDP and is currently contesting for the 2023 election under another party. 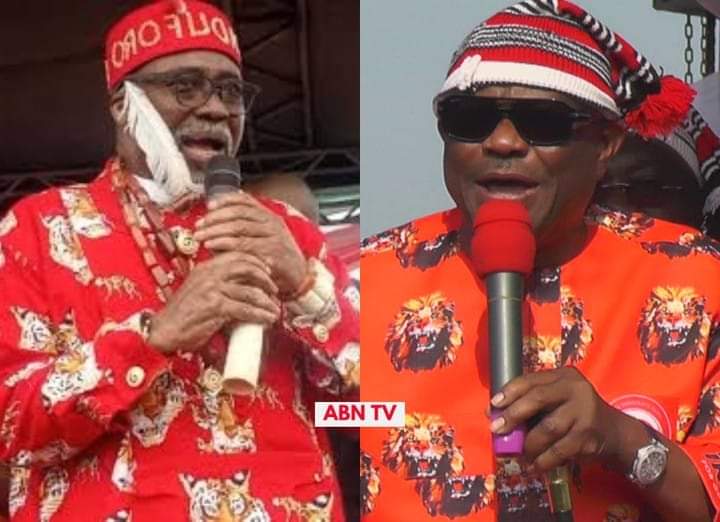 Senator Enyinnaya Abaribe has reacted to a comment by Governor Nyesom Wike that he gave him money yet he went ahead to dump the Peoples Democratic Party.
Abaribe is the senator representing Abia South senatorial district in the Senate.
Reacting, Abaribe said he will not be a slave to Wike because of money, Daily Sun reported.
Speaking in Umuahia, the Abia State capital during the PDP flag-off campaign in the state, Wike had accused an Obingwa brother of Abia State governor, Okezie Ikpeazu of dumping the PDP after receiving money he requested for.
Wike hinted that the said person whom he did not mention his name, was denied ticket by the PDP and is currently contesting for the 2023 election under another party.
”I am aware that because of some people didn’t get ticket, they went and collected form. Today, we commissioned a road in Obingwa Local Government and am sure that person is from Obingwa local government.
“He promised me that he will not leave PDP and I told the governor, please your brother said he is not going to leave PDP and I said what do we do?
“He said he needs some money, we gave him the money like today; three days after, he left PDP”, Wike said, alluding the said candidate lacks integrity and cannot represent the people.
Reacting in a statement however, Senator Abaribe stated that Wike has by what he said, confirmed he (Abaribe) is incorruptible.
Abaribe, who is contesting the Abia South senatotrial seat against Gov Ikpeazu on the platform of All Progressives Grand Alliance (APGA), further stated that he is a free born and cannot be a slave or cannot be bought to be “your Boi Boi”.
According to the statement, “Abaribe is a free born and cannot be a slave. He is an Igbo man; Ndigbo adighi agba boi (The Igbos are never slaves).
“Wike enjoy those you bought. They are actually doing their job very well. Igba Boi is in their blood.
“Go ahead and release another album, Abaribe will never join your Asoebi team of State dancers. Abia State can never be your vassal State”, Abaribe stated.
Top Stories