Aminu Adamu, a student of the Federal University, Dutse, Jigawa State, is in detention for commenting on Aisha’s weight. 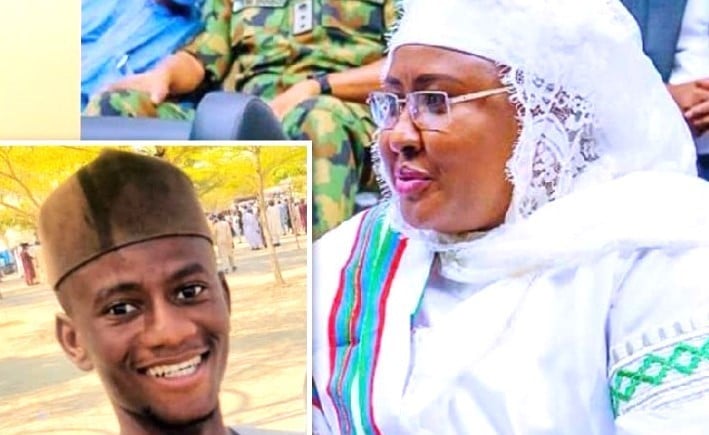 First Lady, Aisha Buhari has been lambasted by social media users over the arrest of a young Nigerian man for commenting on her weight.
Aminu Adamu, a student of the Federal University, Dutse, Jigawa State had in June 2022 tweeted “Su mama anchi kudin talkawa ankoshi” (The mother has got fatter by eating masses’ money).
Aminu’s friends said the tweet was in protest of the eight-month strike by the Academic Staff Union of Universities (ASUU).
The industrial action infuriated thousands of students so much that they made comments, videos, and organised rallies against the government.
After the revelation of Aminu’s ordeal by Peoples Gazette, Nigerians are clamouring for his immediate trial or release.
The 23-year-old, arrested within campus around 12 noon on November 8, was only allowed to speak to his father, Shalele Azare Adamu.
As of Sunday night, Aisha Buhari was trending on Twitter with more than 60,000 mentions as users mount pressure on the authorities to free the student.
Legal practitioner, Inibehe Effiong said it is petty, ridiculous and unconstitutional for the DSS to hold a citizen for “mockery”.
Effiong insists Nigeria is not Iran, North Korea or China and vowed that reckless abuse of power will not be tolerated.
The rights activist stated that Mrs Aisha Buhari should have taken Muhammed to court for libel if she felt defamed.
Effiong said using the secret police to detain a youth “is another evidence of the culture of crass impunity that pervades the Buhari regime”.
“It is not acceptable to deploy state apparatus in such a draconian and oppressive manner the way Mrs Aisha Buhari has done to settle personal scores. The DSS has no jurisdiction in this case”, he added,
In one of his several reactions on the matter, Investigative Reporter, David Hundeyin quoted a 2013 tweet by the APC United Kingdom verified account.
“Death notice (2) Survived by GEJ (Ex-President Goodluck Jonathan), Shepopotamus (Alleged reference to Patience Jonathan)…Funeral to be held at Aso Rock. No sycophants or flowers please”, it reads.
Noting that the tweet was about a sitting First Lady, David wrote: “The sky did not fall down. So please entirely miss me with anything you have to say. Aisha Buhari’s bullying has not even started.”
@SadiqMaunde: “They arrested Aminu for trolling Aisha Buhari, now thousands of Aminus emerged on Twitter. Nigerians are really uniting against their oppressors, may we carry the same anger to the polls.”
@AishaYesufu: “Who is Aisha Buhari that an aggrieved citizen cannot talk about? Those of you talking about her so called powers need to ask yourselves whether you are citizens or slaves.”
@Oluomoofderby: “Aisha Buhari can use the DSS to arrest someone who insulted her but the DSS can’t arrest the people who stoned and burnt Deborah Samuel to death. Deborah’s killers are walking free in Sokoto state. Nigeria is a lawless country.”
@firstladyship: “Aisha Buhari did not spare Aminu because he is Arewa, she sent the DSS to arrest him. What we are fighting against are the old guards who are united. 2023 is a class war between the political class & ordinary Nigerians.”
Top Stories