Two goals from Marcus Rashford and one from Phil Foden means that England will now meet Senegal in their round of 16 match. 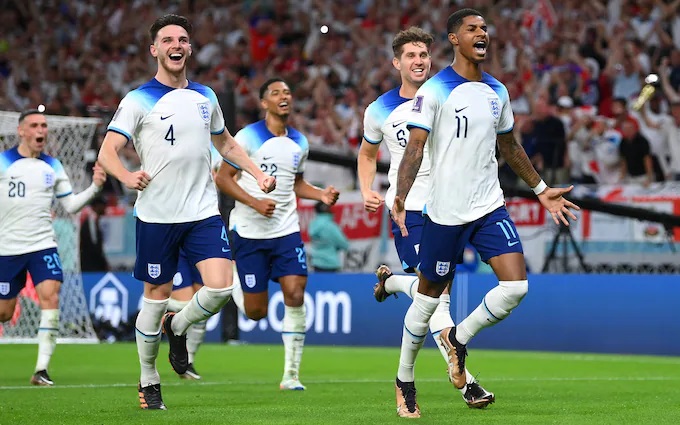 England reached the knock-out stage of the Qatar 2022 World Cup by thrashing Wales 3-0 on Tuesday.
Two goals from Marcus Rashford and one from Phil Foden means that England will now meet Senegal who also became the first African team to reach the round of 16 at the ongoing World Cup.
According to a report by AFP, Gareth Southgate’s side sealed first place in Group B thanks to key contributions from Rashford and Foden after they were restored to the team by the England boss.
Foden showed why there has been such a clamour for him to start as he won the free-kick that Rashford converted to break the deadlock early in the second half at the Ahmad bin Ali Stadium in Doha.
Foden doubled England’s lead just seconds later to effectively ended the one-sided ‘Battle of Britain’ and Rashford struck again to ensure Wales’ first World Cup since 1958 ended in disappointment.
With Foden and Rashford providing the cutting edge so lacking in their previous match — a dour goalless draw against the United States — England won for just the second time in their last nine games.
A spluttering first half showed the Three Lions still have room for improvement as they chase a first major trophy since the 1966 World Cup.
But the ruthless way they demolished Wales after the break provided encouragement ahead of Sunday’s showdown with Group A runners-up Senegal.
While England fans regard Germany and Scotland as their main rivals, Wales have never hidden how much they enjoy getting one over on their hated neighbours.
The Wales squad were famously filmed celebrating England’s embarrassing Euro 2016 exit against Iceland, while Welsh striker Kieffer Moore recently said he would love to knock the English out of the World Cup.
With those slights in mind, condemning Wales to elimination was a welcome bonus for England.
But more importantly they eased the angst that had mounted since they were booed off after the lethargic United States stalemate that followed their 6-2 rout of Iran in the group opener.
Rashford, one of four changes by Southgate, had a golden opportunity to give England an early lead when he surged onto Harry Kane’s pass, but he took too long to shoot and Danny Ward raced off his line to save.
Unable to lay a glove on England, Wales barely made it out of their own half as Southgate’s men monopolised possession for long spells without producing the breakthrough.
When England increased their tempo and passed with more urgency, they immediately scythed through the Wales defence, but Foden’s shot whistled wide.
Criticised for his performance in the defeat against Iran, Wales captain Gareth Bale was anonymous again and the former Real Madrid star, possibly injured, was substituted at half-time.
Yet within six minutes of the restart, Bale’s absence was rendered irrelevant by England’s quick-fire barrage.
Southgate had said he was concerned about Foden feeling under pressure to deliver after the calls for him to be selected, but he didn’t need to worry after the precocious Manchester City playmaker.
Foden was the catalyst for England’s opener as he drove forward to win a 50th minute free-kick that Rashford brilliantly curled into the far corner of Ward’s goal from 25 yards.
Suddenly, England were pressing with more energy and they pounced again 60 seconds later when Rashford forced Wales to surrender possession and Kane’s low cross reached Foden, who slotted home at the far post.
Moore tried to rescue Wales with dipping effort that Jordan Pickford saved well, but Rashford delivered the knockout blow with his third goal of the tournament in the 68th minute.
Kalvin Phillips’ long pass sent Rashford scampering down the right flank and, with the hapless Wales defence backing off, the Manchester United forward cut inside before planting a low shot through Ward’s legs.
Top Stories