Garba spoke at a media parley with the theme ‘Let’s Talk Nigeria’ organised by the Kaduna State League of Veteran Journalists in collaboration with The Arewa House and the Hamdala Hotel, Kaduna. 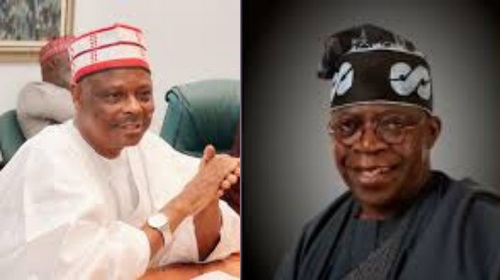 APC presidential candidate, Bola Tinubu will defeat the New Nigeria Peoples Party and former governor of the state, Rabiu Kwankwaso in the 2023 presidential election in the state.
This is according to Kano State Commissioner for Information, Muhammad Garba, according to a report by Punch.
The commissioner likened the development to when the late MKO Abiola defeated Kano-born Bashir Tofa in the 1993 presidential election in the state, saying that history is about repeating itself in the 2023 presidential election.
Garba spoke at a media  parley with the  theme ‘Let’s Talk Nigeria’ organised by the Kaduna State League of Veteran Journalists in collaboration with The Arewa House and the Hamdala Hotel,  Kaduna.
He said, “I know the former governor of the state is also going to be on the ballot but history can repeat itself again in Kano because late Moshood Abiola of the defunct SDP defeated Kano born late Bashir Tofa of the defunct NRC during the 1993 presidential election.
“I am confident that Kano State will produce lots of votes come 2023. The votes from Nasarawa Local Government of the state alone is  more than the entire votes of the South-Eastern states combined. I am confident we will deliver Kano State to APC.
“The state government will provide an enabling environment for all the candidates and anything can happen and all candidates will certainly get their share of votes depending on how the electorates perceived them.”
On security, the commissioner said the state governor had provided an enabling environment for all regardless of tribe, ethnicity and religion, declaring that  “Kano State with the highest population in northern Nigeria is the most peaceful state.”
“His Excellency wants to leave a legacy in Kano as the most peaceful state in the country,” he added.
Garba, who was  a former national president of the Nigeria Union of Journalists, told the veterans that the ongoing construction of 30 shops embarked upon by the Ganduje’s administration was almost completed.
He said the idea behind the project was to give practicing journalists in the state financial muscles to enable them discharge their duties efficiently.
While commending the efforts of the Kaduna Leagues of Veteran Journalists  and assuring them of the needed support, the commissioner lamented that, “it is only in journalism that solidarity and support for the profession is not gotten. It is good to leave a legacy in whatever you do particularly in human development.”
Top Stories