The position was left vacant after the demise of Nse Ekpenyong, a former House of Representatives Member for the Oron Federal Constituency who died on April 23, eight months ago and his seat declared vacant on June 30 by the Speaker during his internment. 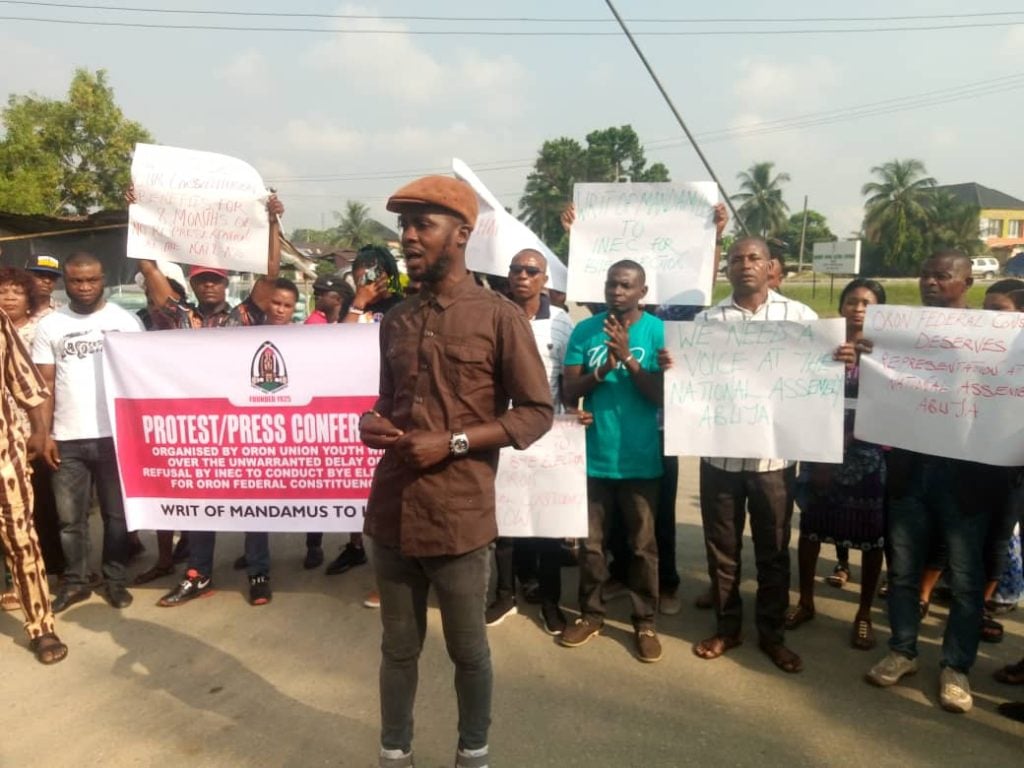 So many youths of Oron Union in Oron Local Government Area of Akwa Ibom State had staged a protest.

They stormed the premises of the Independent National Electoral Commission, INEC, along Udom Udoma Avenue Uyo in protest of what they described as ‘delay or tactical refusal’ by the commission to conduct a bye-election to fill the vacant office of the federal constituency.

The position was left vacant after the demise of Nse Ekpenyong, a former House of Representatives Member for the Oron Federal Constituency who died on April 23, eight months ago and his seat declared vacant on June 30 by the Speaker during his internment.

The youths of the area in a protest on Wednesday lamented that the absence of representation had deprived them of many benefits and rights from the National Assembly accusing the electoral umpire of nonchalance in conducting a bye-election in the area.

Displaying placards with various inscriptions such as “INEC sabotaging our constitutional benefits for 8 months of no representation, ‘Oron Federal Constituency deserves a Representative from National Assembly in Abuja, ‘We need a voice at the National Assembly,” among others, the youths urged the INEC National Chairman, Prof Yakubu Mahmood to ensure that the bye-election is conducted immediately in the federal Constituency.

The youths described the federal constituency as the largest in Nigeria with the highest oil producing communities in the Niger Delta.

Speaking on behalf of the protesters, the International president of the group, Mr John Bassey flanked by the secretary, Maxi Mkpo recalled that INEC sometime in January conducted bye-elections for six constituencies in four states of the federation and wondered why Akwa Ibom would be different.

The statement read in parts, “Today, we are gathered here to send a very strong signal to the Chairman of National Electoral Commission INEC Prof, Mahmood Yakubu over this perceived cruel disenfranchisement and broad daylight robbery of our constitutionally and democratically given right to representation at the green Chambers of the National Assembly, Abuja.

“INEC has technically avoided any process that could be initiated for the conduct of a bye-election in our federal constituency. As a people, we are deliberately being denied our right to representation as obtained in the constitution of the federal republic of Nigeria.

”It is about eight (8) good months since the unfortunate departure of our Late MP in April 23rd, this year and the subsequent declaration of the seat vacant by the speaker followed by his internment on 30th June 2022. Hence, we are bitterly worried over what could be the justification for INEC not to facilitate the process of conducting a bye-election to fill the vacant seat.

“Recall, an indigene of Mbo LGA, Mr. Emmanuel Inyang, on October 12th 2022 embarked on a one-man protest to the Uyo office of the Independent National Electoral Commission (INEC) over what he described as ‘unnecessary delay’ by the Commission to fill in replacement, for vacant seats in the National Assembly. This press conference is to re-emphasize and state our points of anger categorically and unequivocally to INEC about the looming dangers of its seeming refusal to conduct the bye-election and the many disadvantages of such an undemocratic delay to the Oro people.

“Our point is very clear and straightforward, we are calling on INEC to fast-track the processes of conducting a bye-election for this mega and oil-rich constituency to avert any future breakdown of law and order within the already volatile elections season and Niger Delta region.”

He also called on members of the parliament representing other federal constituencies within the state to join hands in solidarity in condemning such acts during sessions.

He added that further delay by the commission to accede to their request before the end of December 2022 will leave them with no option but to occupy the state headquarters of INEC from the first of January 2023 until the needful is done.

However, the Head of Operations of INEC in Akwa Ibom, Vincent Ogene addressing the youths assured them that the issue will be addressed.

Ogene commended the youths for their orderly and peaceful conduct nothing that the commission at the national level will give a directive on what is to be done.