The demand was made after a motion from a member of the House from Katsina State, Babangida Ibrahim, was adopted during plenary on Thursday, December 15. 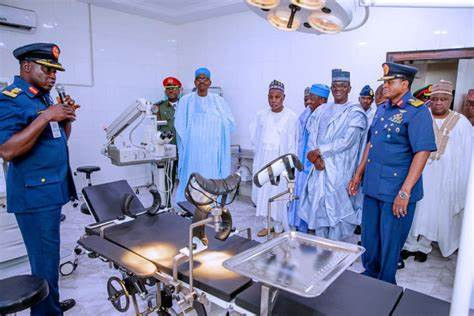 President Muhammadu Buhari has been told to relocate a Federal Medical Centre sited in Daura, his hometown.
Members of the House of Representatives asked Buhari to relocate the FMC to Funtua, Katsina state.
The demand was made after a motion from a member of the House from Katsina State, Babangida Ibrahim, was adopted during plenary on Thursday, December 15.
Ibrahim in his motion titled ‘Need to relocate the upgraded General Hospital, Daura, to Funtua as Federal Medical Centre’, cited a recent approval to convert the General Hospital Daura to an FMC, following the upgrade of the FMC Katsina to a University Teaching Hospital. He also noted that the new FMC in Daura was included in the 2023 budget estimates presented by the President to the National Assembly.
He also disclosed that in August 2019, the Federal Government established the Nigerian Air Force Reference Hospital, a world-class facility, to address the constant medical tourism abroad in search of the best medical services.
Ibrahim said;
“The House is worried that the interest of the large populace in Kastina State will be adversely affected if the sited Federal Medical Centre is left in Daura, despite the presence of the Air Force Reference Hospital and its geographical proximity to Katsina.
“The House is also worried that only Funtua Senatorial District lacks the presence of a federal medical facility despite its geographical distance from such facilities available in the state.”
Following the motion presented by Ibrahim, the lawmakers urged the Federal Ministry of Health to “reconsider the process of converting Daura General Hospital to Federal Medical Centre in the public interest.”
They also asked the ministry to facilitate the relocation of the FMC to Funtua, “being the only senatorial district without a federal health tertiary institution, with immediate effect.”
Top Stories