Mauricio Henao said he was parked on the Pacific Coast Highway in Malibu when he got out of his car to answer his phone. 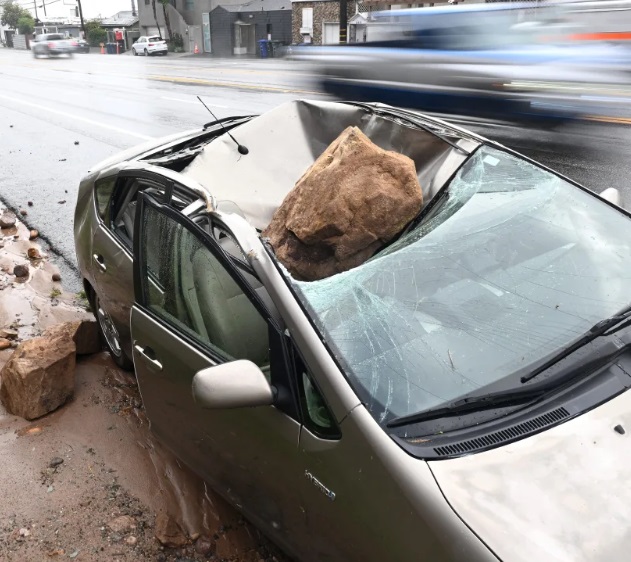 A California man has escaped death by the whiskers after a large rock crushed his car moments after he stepped out of his car to take a phone call
Mauricio Henao said he was parked on the Pacific Coast Highway in Malibu when he got out of his car to answer his phone.
Shortly after he stepped out of the car, he heard the "loud crashes" of the rocks on the hillside behind him starting to slide, according to KTLA 5.
"I was in the driver's seat, walked out, got a call, ran back inside, came out, and the car was just totaled," Henao told KTLA. "I ran out and saw my car just crushed."
A four-foot boulder crushed the roof of his sedan as rocks and debris obstructed four lanes of traffic, KTLA reported.
"The rock is the size of the whole hood," Henao told KTLA. "The windshields are all broken, and the frame of the car is just all twisted."
Henao credits the phone call he received for saving his life, KTLA reported.
"I'm pretty shook up," Henao told the outlet. "Honestly, I don't think I'll park here again after this. I'm a little traumatized by this whole ordeal."
Nobody was injured during the rockslide, but other vehicles were damaged.
Area resident Nick Kennedy told KTLA that the tumbling rocks "came across the street," damaging his SUV that was parked in his driveway.
"I'm kind of glad my car was there," Kennedy told the outlet. "I don't know if [the rocks] would have gone through the wall of the house and nailed me because my desk is right on the other side of that wall."
Top Stories