Ibrahim Dasuki who is the father of the former National Security Adviser, Sambo Dasuki passed away amidst tears. 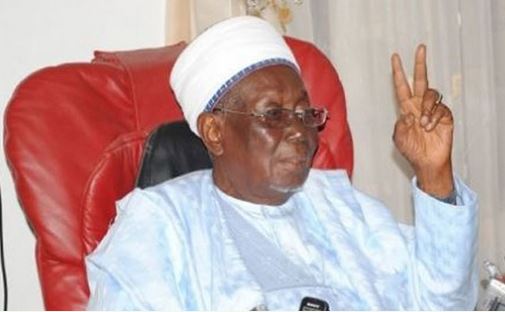 The former Sultan died on Monday and would be buried on Tuesday by 2:00p.m. local time according to Muslim rites, Channels TV reports.

The cause of death is not yet known but it may not be unconnected to his old age. Dasuki was the 18th Sultan of Sokoto.

He was deposed in 1996 during the military government of Sani Abacha. Prior to becoming Sultan, he held the traditional title of Baraden Sokoto.

Dasuki was the first Sultan from the Buhari line of the house of Dan Fodio and he was a close associate of Ahmadu Bello, a friend of Abubakar Gumi and was influential in the founding of Jama’atu Nasril Islam.

After the death of Abubakar Siddique, the 17th Sultan of Sokoto on November 1, 1988, Dasuki was among the leading contenders to become the new Sultan.

Some of his opponents included Shehu Malami and future Sultan, Muhammadu Maccido. Maccido was the son of Abubakar Siddique and he was popular among the populace in Sokoto.

But Mr Dasuki was close to the administration of General Ibrahim Babangida and on December 6, 1988, he was announced as the new Sultan to the dismay of some in Sokoto.

The announcement led to five days of rioting in which 10 people died. He was considered a modernist against the wishes of some who wanted the traditionalist candidate, Maccido.

As Sultan, Dasuki tried to endear himself to the Sokoto populace. He built 10 Quaranic schools in 1990 and established an adult literacy class.

Dasuki also tried to unite the Muslim ummah through the reorganization of Jama’atu Nasril Islam and the Nigerian Supreme Council of Islamic Affairs(NSCIA). He gave impetus to the appointment of Lateef Adegbite, who became the first Yoruba secretary general of NSCIA.
Top Stories